Bring back the "noisy filibuster"

Something I wrote a number of years ago. It comes up every few years, usually during transitions of power in the U.S.

That's happening again now, and people are talking about filibusters once more, so here we go again.

Most people know about the origins of the Filibuster. A quirk in U.S. Senate rules, says that people can go on talking endlessly, about anything they like, during the "debate" period for a bill, and no one can stop them. This allows a small number of people, trading off their speech right, to bring the entire Senate to a halt, and prevent any action on whatever bill the talker(s) oppose. Years ago, it required a 2/3 supermajority vote in the Senate, to invoke "cloture" and force the talking to stop so they could get on to a vote.

This would have the effect of causing a huge furor in government, which quickly spread to the press and the attention of the voters (people who usually didn't pay much attention to Senate business). The people filibustering a bill, did it with exactly this in mind: To bring the bill (and the controversy around it) to the atttention of the people. They believed that the people would side with them, if they knew what was going on, and would call their Senators and Congressmen to quit supporting the bill being filibustered. Sometimes the filibusterers were right about the people supporting them, and sometimes they were wrong. But whichever, that was their intention.

Then in 1975, the Senate changed the rules. Now it only took a 60% majority (60 out of 100 Senators) to invoke cloture and end the filibuster. And it became a "silent filibuster", where only that particular bill now needed the supermajority... but the rest of Senate business could proceed, instead of ALL Senate business being halted while the filibuster went on.

So, a filibuster became "not such a big deal"... filibusters could go on all the time, and weren't particularly disruptive. Senators (particularly those in the majority) praised the change, pointing out that now the Senate could do its legislating more smoothly and efficiently.

BUT... this violates one of the most basic principles of American government, as designed by the Framers. They deliberately designed the U.S. Government to NOT be "smooth and efficient".

The Framers were basically conservative men. They believed that society would work the best, and provide the greatest safety and freedom for its people, if governmental interference were minimized. To that end, they designed a Federal government where four very different groups of people, all had to agree on a law, before it went into force. The Framers decided that if any one of those four groups objected, that should be enough reason to dump the bill and keep the people free of its restrictions and encumberances.

The four groups were, of course, (1) Citizen-legislators who had real jobs in the real world, who took two years off to join the legislature and then went back to their real jobs afterward (House of Representatives); (2) Professional politicians whose job it was to make sure the Fed govt did not take powers that should have been left to the states, and so were appointed by their state governments to a six-year term (Senate) to protect the State's authority; (3) An Executive officer whose job was to carry out the laws passed by the first two groups but to veto any law he considered unsuitable (President); and (4) a group of judges who would examine actual cases where someone complained his rights were violated by the exercise of a law passed by the first three groups (Supreme Court).

Only if all four of those very different groups ALL agreed that a law was good, would it be allowed to stay in force. If any one of them disagreed, the law was either never enacted, or was tossed out shortly afterward. The whole purpose of this clumsy, cantankerous arrangement, was to PREVENT as many laws as possible, from being imposed on the American people; and to leave them free to do as much as possible WITHOUT government restriction or interference. Only a relatively few laws were to be enacted: things that most people in ALL groups agreed we needed, and agreed were permitted by the Constitution.

People who praise the "silent filibuster" for its tendency to make Senate legislation "smoother and easier", have forgotten that it's not supposed to be smooth OR easy. The purpose of the U.S. Government, is to ensure FREEDOM, not to ensure government restriction. And that's all any law can do: restrict and/or punish people.
The reason it's always been possible for one guy (or one small group) to block ALL legislation in the Senate, is so that one guy can **** off a lot of people (including the general public who otherwise weren't paying much attention) and get them to examine what's going on. What is this one guy so concerned about, that he sees fit to bring the entire Senate to a halt and prevent ANY legislation?

The purpose of a filibuster, is to ignite furious debate among a much wider segment of the population, than the Senate usually gets. And the guy doing the filibustering, does it because he believes that when lots of the public get involved, his side is more likely to win. Those large numbers of people, will call or write their Senators and tell them to kill the bill; since he believes the majority of the American people would actually OPPOSE the bill if they knew the details.

The introduction of the "silent filibuster" in 1975, took away this valuable (if disruptive) safety valve, and ensured that most American people (who seldom pay attention to what's going on in the Senate) would remain ignorant of the bad things the one person finds in the bill. The 1975 change still allows a "noisy filibuster" IF the Senate Majority Leader insists on that kind. But the majority is the LAST group that wants massive public attention to a bill they can pass with a quiet vote.

I last talked about bringing back the "noisy filibuster", when Republicans had the majority in the Senate and Democrats were filibustering things, all without getting much of the public involved. Now the shoe is on the other foot, with Democrats in the majority and Republicans filibustering things. I didn't like it then, and I don't like it now. In both cases, I wish the filibusters would cause MAJOR disruptions, and that the issues involved would get massive attention from the voting public, with massive calls to their Senators and Representatives following, to settle the matter quickly one way or another.

I thought people wanted to talk about the filibuster, its use and effect, etc.?
W

One of the checks and balances tactics...

Senate Republicans Defend Filibuster as They Prepare for One-party Rule
November 17, 2016 — Senate Republicans are eager to flex their party's newfound political muscle next year, but say they have no plans to weaken rules enabling Democrats to block major legislation and, potentially, any Supreme Court nomination put forth by soon-to-be President Donald Trump.

Whether Republicans adhere to their promise of restraint will determine the fate of the filibuster, which checks the power of the majority by making some degree of minority support necessary for most bills to pass the Senate and for high court nominees to be confirmed. For now, Republicans are defending the filibuster as they plan a busy legislative agenda for the first 100 days of the Trump administration — an agenda they know will prompt fierce Democratic resistance on some items. "We have not changed the rules in the Senate, should not change the rules in the Senate," Republican Senator Thom Tillis of North Carolina told VOA. "There's a reason why we're a distinct institution." "I would not like to turn this Senate into the House any more than we have done," said South Carolina Republican Lindsey Graham, referring to the fact that, in the House of Representatives, all legislation is passed by simple majority votes. Senator Jeff Flake of Arizona said the filibuster "is what makes the Senate the Senate. And I know a number of my [fellow Republican] colleagues feel the same way."

The sun rises over the U.S. Capitol in Washington​
‘Last legislative check’

The filibuster requires at least 60 of the Senate's 100 members to vote affirmatively for the chamber to take up a bill or nomination, and similar three-fifths backing to end debate and hold a final vote. It can be sidestepped if senators grant unanimous consent to advance a bill, or if a party has at least a 60-vote majority in the chamber — a rarity in modern times. Senators of both parties have long understood the filibuster's importance in America's system of checks and balances on political power. "If the right of free and open debate is taken away from the minority party, then the millions of Americans who ask us to be their voice [will be silenced]," said Barack Obama in 2005, when he represented Illinois in the Senate.

In 2012, then-Minority Leader Mitch McConnell, a Kentucky Republican, described the filibuster as "the last legislative check against the kind of raw exercise of power majority parties always have been tempted to wield." Filibusters were never used more than 10 times a year prior to the 1970s. They regularly have exceeded 100 per year during the Obama administration, sometimes to block legislation with significant public support, like stiffer gun laws, but most often to block presidential nominations of judges and members of his administration. 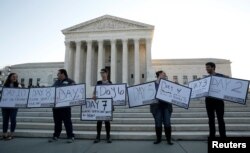 Protesters with We Need Nine, a group calling for the U.S. Senate to allow President Barack Obama to nominate a ninth Supreme Court justice, display their signs in front of the Supreme Court in Washington, D.C.​
New Senate rules

In 2013, frustrated by persistent Republican filibustering of Obama's nominees, then-majority Democrats changed Senate rules so that only Supreme Court nominations could be blocked. Republicans were outraged. John Cornyn of Texas warned of setting "a new precedent in the Senate — one that says it's permissible to break the rules of the Senate at any point to get your own way if the majority has the gumption to do it." Democrats made a similar point years earlier, when then-majority Republicans threatened to rein in the filibuster during the George W. Bush administration. "They [Republicans] want their way every single time, and they will change the rules, break the rules, misread the Constitution so that they will get their way," said Senator Chuck Schumer of New York in 2005. "The checks and balances say that if you get 51 percent of the vote, you don't get your way 100 percent of the time." "Majorities are fleeting," Cornyn warned Democrats in 2013. "The shoe will be on the other foot."

Indeed, Senate control flipped to Republicans in elections the following year. It is in the context of more than a decade of partisan warfare over the filibuster that Republicans must decide how to proceed next year, mindful that Democrats could pursue all-out obstruction against Trump's agenda much the way they frustrated Obama's agenda at nearly every turn.

A moment ago
Jets

"Tell me Your Secrets" On Amazon

Get Your Experimental Vaccine Injected ASAP!!
6 7 8