Unspeakable horror in Nigeria continues without solutions or intervention

For hours three Boko Haram female terrorists fire bombed and shot up a refugee camp. A surviving child witnessed the horror as many children were heard screaming as they were burned alive in their huts. Then the three female terrorists went to a neighboring village where many were fleeing and all three blew themselves up in crazed suicide “martyr” fashion killing even more villagers.

This is the kind of world we are now living in. This is demonic, this is why we cannot win these wars with bullets alone. They are all over the globe plotting and being deceived by the evil one himself. It is not going away.

DALORI, Nigeria – A survivor hidden in a tree says he watched Boko Haram extremists firebomb huts and heard the screams of children burning to death, among 86 people officials say died in the latest attack by Nigeria's homegrown Islamic extremists.

Scores of charred corpses and bodies with bullet wounds littered the streets from Saturday night's attack on Dalori village and two nearby camps housing 25,000 refugees, according to survivors and soldiers at the scene just 5 kilometers (3 miles) from Maiduguri, the birthplace of Boko Haram and the biggest city in Nigeria's northeast.

The shooting, burning and explosions from three suicide bombers continued for nearly four hours in the unprotected area, survivor Alamin Bakura said, weeping on a telephone call to The Associated Press. He said several of his family members were killed or wounded.

The violence continued as three female suicide bombers blew up among people who managed to flee to neighboring Gamori village, killing many people, according to a soldier at the scene who insisted on anonymity because he is not authorized to speak to journalists.

Troops arrived at Dalori around 8:40 p.m. Saturday but were unable to overcome the attackers, who were better armed, said soldiers who spoke on condition of anonymity because they were not authorized to speak to the press. The Boko Haram fighters only retreated after reinforcements arrived with heavier weapons, they said.

Journalists visited the carnage Sunday and spoke to survivors who complained it had taken too long for help to arrive from nearby Maiduguri, the military headquarters of the fight to curb Boko Haram. They said they fear another attack.

Eighty-six bodies were collected by Sunday afternoon, according to Mohammed Kanar, area coordinator of the National Emergency Management Agency. Another 62 people are being treated for burns, said Abba Musa of the State Specialist Hospital in Maiduguri.

Boko Haram has been attacking soft targets, increasingly with suicide bombers, since the military last year drove them out of towns and villages in northeastern Nigeria.

The 6-year Islamic uprising has killed about 20,000 people and driven 2.5 million from their homes.


What were we talking about again?

Oh yeah....how Obama hates Africa and hasn't lifted a finger to stop the mass Islamic slaughter over there.
K

Whether its killing children in Nigeria or injecting dogs with acid in Iran, muslims prove every day that the earth must be scraped free of their rot.

Tens of thousands will die if treatment does not reach them soon, Unicef warns. In areas where Boko Haram militants had been in control, it found people without water, food or sanitation. Last month, a charity said people fleeing Boko Haram had starved to death. The Islamist group's seven-year rebellion has left 20,000 people dead and more than two million displaced. Nigeria's military is involved in a large-scale offensive against the group. 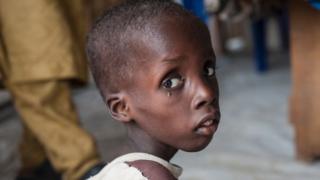 Unicef says that as more areas in north-eastern Nigeria become accessible to humanitarian help, the extent of the nutrition crisis affecting children is becoming more apparent. It said that of the 244,000 children found to be suffering from severe acute malnutrition in Borno, almost one in five would die if they were not reached with treatment. "Some 134 children on average will die every day from causes linked to acute malnutrition if the response is not scaled up quickly," said Manuel Fontaine, Unicef's Regional Director for Western and Central Africa. "We need all partners and donors to step forward to prevent any more children from dying. No-one can take on a crisis of this scale alone."

Mr Fontaine said he had seen destroyed towns accommodating displaced people and thousands of frail children in desperate need of help. "There are two million people we are still not able to reach in Borno state, which means that the true scope of this crisis has yet to be revealed to the world," he added. "There are organisations on the ground doing great work, but none of us are able to work at the scale and quality that we need. We must all scale up." MSF said in June that a "catastrophic humanitarian emergency" was unfolding at one camp in Bama, Borno state, where 24,000 people had taken refuge. Many inhabitants were traumatised and one in five children was suffering from acute malnutrition, it said.

The thing is in the good old days, the population that has such a difficult time handling life as a civilized human did not have much life expectancy. But thanks to Bill Gates and other democrat wackos sending them free food, etc., they are overpopulating and have absolutely no idea what to do with themselves. So they look to either rape, replicate or murder, whether it be for Abrahamic deities or not.
You must log in or register to reply here.

How many African-Americans were killed in WWI?
8 9 10

Will Conservative Patriots Back Down From Their Running Over Protestors Bills?
2 3 4