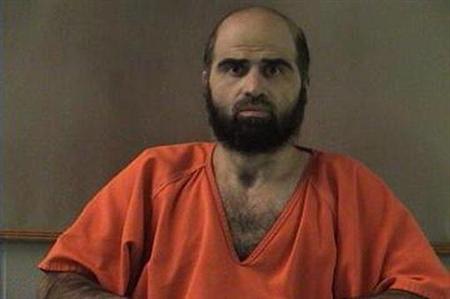 SAN ANTONIO (Reuters) - A U.S. military court ruled on Thursday that Fort Hood shooting suspect Major Nidal Hasan must shave his beard, which he says he grew because of his Muslim faith, before appearing for court-martial on murder charges connected to the 2009 rampage.

Hasan is accused of opening fire on a group of soldiers who were undergoing medical exams at the Army post in Texas on November 5, 2009, in preparation for their deployment to Iraq. Thirteen people died in the attack and 32 others were wounded.

He could face the death penalty if convicted.

"In front of a military panel, it is undeniable that failure to comply with Army grooming regulations would cast him in a negative light," a majority of judges on the U.S. Army Court of Criminal Appeals ruled.

"The military judge has the authority to prescribe the proper uniform for trial," the judges added.

Hasan's lawyers have indicated they will appeal the ruling to the Court of Appeals of the Armed Forces, the superior court under the Uniform Code of Military Justice.

His trial has been on hold for months while the issue of his beard was adjudicated. A date for the court-martial will not be set until the higher court makes a final ruling.

Hasan had argued that he grew the beard to show his faith and requiring him to shave it amounted to religious discrimination.

Army prosecutors countered that Hasan was a practicing Muslim for more than 20 years in the Army while adhering to grooming standards and remaining clean-shaven.

The court rejected Hasan's arguments that the Religious Freedom Restoration Act, a 1993 law passed by Congress "to protect the free exercise of religion," should override Army grooming rules that prohibited soldiers from wearing a beard and considered a soldier to be 'out of uniform' with one.

"We agree with the military judge's conclusion that wearing of a beard denigrates the dignity, order and decorum of the court-martial, and is disruptive under the current posture of the case," the majority ruled in a 4-2 vote.
Click to expand...

It took the feds three years to decide whether a jihad soldier who killed his own men should shave? It would be funny if it wasn't such a tragedy and an example of the incompetence of the fat asses who run the Pentagon these days.
OP

whitehall said:
It took the feds three years to decide whether a jihad soldier who killed his own men should shave? It would be funny if it wasn't such a tragedy and an example of the incompetence of the fat asses who run the Pentagon these days.
Click to expand...

A momentary pause to consider the nature of the man Trump supporters are defending.
4 5 6

A moment ago
NotYourBody
N

A moment ago
Olde Europe

Heated disagreement breaks out in Situation Room over hydroxychloroquine, Navarro vs Fauci
14 15 16

Casting your own bullets