I think a pick such as this would make a lot of us feel better about his administration. Rudy Giuliani would not...

It would show that he isn't as anti-nonwhite and probably a little more reasonable.

I think a pick such as this would make a lot of us feel better about his administration. Rudy Giuliani would not...
Click to expand...

Trump stated that unless an appointment name comes from his mouth it is all speculation.
W

Two sources familiar with the decision, who requested anonymity because they weren't authorized to discuss it by name ahead of the announcement, also said that the ambassadorship will be a Cabinet-level position, the Associated Press reported. Haley, an outspoken Trump critic throughout much of the presidential race, would become his first female Cabinet-level official if confirmed by the Senate. She's the second Asian-American to serve as a US governor. 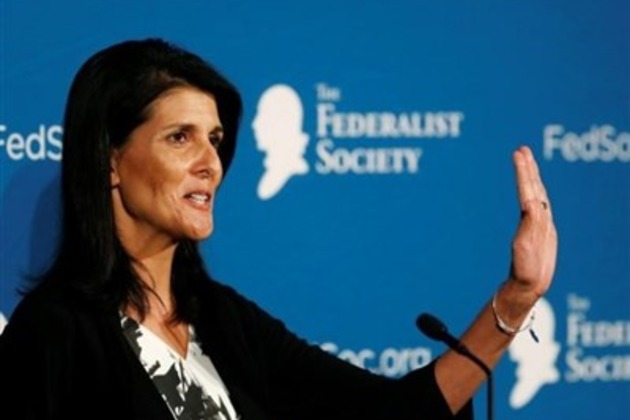 Not all presidents have treated the ambassadorship to the UN as a Cabinet-level position, and Republicans have tended not to grant that status. Haley's new job clears the way for Lt. Gov. Henry McMaster to step into the role of South Carolina governor. McMaster was an early Trump endorser, backing him before the state's GOP primary in February.

At the time, Haley campaigned for Florida Sen. Marco Rubio, before going on to support Texas Sen. Ted Cruz. Despite misgivings about Trump, she met with the president-elect last week at Trump Tower. Afterward, Haley said they'd had a 'very nice' conversation. Trump is spending Thanksgiving with his family at his Mar-a-Lago estate in Palm Beach, Florida.

When Americans went to the polls on 8 November to select the next leader of the world's most powerful nation, voters in 30 of America's 50 states agreed. Trump is now the president-elect and putting together his national security team. While it's hard to discern the pillars of a Trump foreign policy from his actual choices and rumoured favourites - his transition is proving to be every bit as unconventional and unpredictable as his candidacy - actual experience is not a prerequisite to be America's chief diplomats, the secretary of state and US ambassador to the United Nations.

South Carolina Governor Nikki Haley appears to be Trump's pick to be UN ambassador. Former Massachusetts Governor and presidential candidate Mitt Romney is one of the frontrunners to be secretary of state. Another is former New York City Mayor Rudy Giuliani. None of them possess a lengthy foreign policy resume. Does their lack of experience in geo-politics matter? Well, no and yes. When it comes to the geo-, each would be supported by a career diplomatic bureaucracy to develop policy options and talking points. 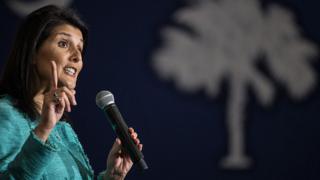 South Carolina Governor Nikki Haley addresses the crowd during a campaign rally for Republican presidential candidate Marco Rubio at Clemson University Friday, February 19, 2016 in Clemson, South Carolina​
Policy doesn't advance in a vacuum. Gaining international support for what America wants to do is all about politics. As successful elected officials, their political skills can serve them well. Many leading international diplomats are politicians, although their skill and knowledge can vary widely, from the profound to the profane. For every prime minister like Lee Hsien Loong of Singapore, who can provide off-the-cuff a detailed and sophisticated tour d'horizon of the Asia-Pacific region, there is a boorish novice like Philippine President Rodrigo Duterte.

Hillary Clinton frequently cited her electoral experience as a senator and presidential candidate in diplomatic meetings to break the ice with a foreign leader. She understood that hesitation to follow American advice was frequently less about a substantive disagreement than a local political problem. Her ability to relate, politician to politician, made her more effective. The lack of foreign policy experience will not be a big issue externally - America's relationships with key allies and friends are driven by long-standing interests.

The Senate voted Tuesday to confirm Nikki Haley as ambassador to the United Nations, making her the fourth member of President Donald Trump's Cabinet to be approved even as Republicans and Democrats battle angrily over the pace of confirmations. Haley, the governor of South Carolina and a rising GOP star, was approved with wide bipartisan support, 96-4. Republicans are upset at what they complain is a deliberate effort by Democrats to slow walk approval of Trump's top government executives and argue the GOP was much more cooperative when President Barack Obama got seven Cabinet members confirmed on the day he was sworn in back in 2009.

Haley, Republicans say, is an example of a largely non-controversial nominee who should have been approved faster. "Our Democratic friends need to get over the fact that the election is over and now we have the responsibility of governing -- hopefully, together. But instead so far they've just chosen to obstruct and foot-drag, and to me one of the most shameful and reckless parts of this is the way in which they delayed the confirmation of an important member of President Trump's National Security Cabinet," said Sen. John Cornyn of Texas, the second-ranking Republican leader. But Democrats defended what they said was a necessary pace. They charged that Trump selected several people with complicated financial portfolios that needed to be cleared by a government ethics watchdog to ensure they would not have conflicts of interest while in office and others with alleged ethical lapses related to stock trade and unpaid nanny taxes. "There are a bunch of nominees that have real problems," said Senate Minority Leader Chuck Schumer, a New York Democrat. "Isn't it the obligation of both Democrats and Republicans to vet these candidates thoroughly? They are going to have huge power over the lives of every American." 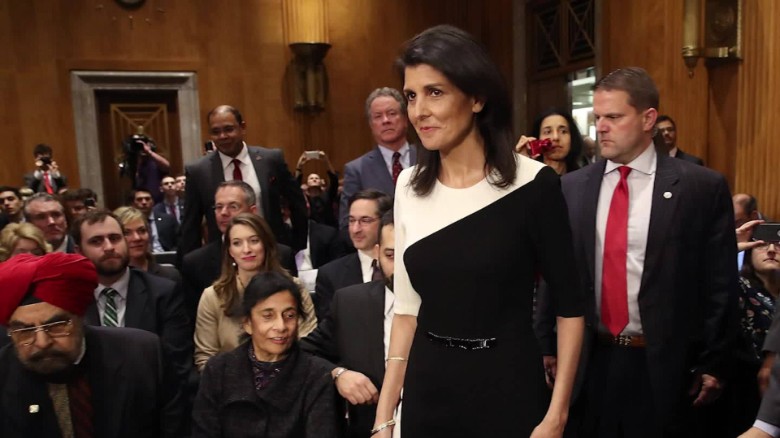 Nikki Haley hopes to 'educate' Trump​
Two embattled nominees, Georgia Republican Rep. Tom Price and Republican South Carolina Rep. Mick Mulvaney faced contentious confirmation hearings Tuesday and four other nominees were voted out of committee. One was Haley who won approval of the Foreign Relations Committee on a voice vote, although two Democrats recorded "no" votes against her. "The position of US ambassador to the United Nations requires a high level of expertise on international affairs, not someone who will be learning on the job," said Sen. Chris Coons, a Democrat from Delaware, explaining his vote against her. The Senate Commerce Committee easily cleared businessman Wilbur Ross to be secretary of commerce and Elaine Chao to be secretary of transportation. The Senate Banking Committee cleared Dr. Ben Carson to be secretary of housing and urban development. Votes on two other nominees were abruptly canceled without explanation late Monday night.

Aides in both parties were tight-lipped for hours about why Energy Committee Chairman Lisa Murkowski of Alaska and ranking Democrat Maria Cantwell of Washington called off the committee votes for energy secretary nominee Rick Perry and interior secretary Ryan Zinke. An aide to Murkowski finally issued a statement that there had been a "miscommunication" between the two senators and that votes would be rescheduled soon. But floor votes on the nominees who cleared committee will have to wait until at least next week. That's because the Senate is leaving town tomorrow as Republicans and Democrats head to their legislative retreats in Pennsylvania and West Virginia, respectively. GOP leaders said before they leave they will trigger procedural steps that will allow them to clear secretary of state nominee Rex Tillerson early next week and other Cabinet nominees soon after. While Democrats have successfully stalled some of these nominations, they don't have the votes to block them.

And Why Aren't They Rioting In Washington DC?, All Around The White House?