MOGADISHU, Somalia  Islamist militants detonated a truck bomb Tuesday in front of the education ministry in Somalia's capital, killing at least 70 people and wounding dozens, a rescue official said. Among the dead were students and parents.

It was the biggest attack in Somalia's capital since the al-Qaida-linked group known as al-Shabab withdrew most of its forces in August amid an offensive by African Union forces and as a famine gripped much of the country.

The truck blew up after coming to a halt at a security checkpoint at the entrance to the Ministry of Education, said Ali Hussein, a police officer in Mogadishu. After the thunderous blast, blackened corpses were sprawled on the debris-strewn street amid burning vehicles. Uniformed soldiers dragged the wounded from the hellish scene.

Ali Abdullahi, a nurse at Medina hospital said they were treating people with horrific wounds, including amputated limbs, burns, and patients who became blinded.

"It is the most awful tragedy I have ever seen," he said. "Imagine dozens are being brought here minute by minute. Most of the wounded people are unconscious and others have their faces blackened by smoke and heat."

Ali Muse, the chief of Mogadishu's ambulance service, told The Associated Press that at least 70 people had died and at least 42 others were wounded.

"The explosion has not only affected the targeted place, but even passer-by people and car passengers died there. The death toll may increase and we are still carrying many dead bodies" he said.

In a statement, the government gave a death toll of 15. It was not immediately clear if it was an early count.

"The casualties are mostly students and parents who were waiting for results of scholarships from the Ministry of Higher Education," the government said. "The attack shows that the danger from terrorists is not yet over and that there are obviously still people, who want to derail the advances that the Somali people have made towards peace."

Al-Shabab immediately claimed responsibility for the attack on a website it uses.

"Our Mujahideen fighters have entered a place where ministers and AMISOM foreigners stay," al-Shabab said in a brief post on a website, referring to the Ugandan and Burundian forces who make up the African Union peacekeeping mission.

Suicide bombings were unheard of in Somalia before 2007 but have become increasingly frequent. Al-Shabab claims allegiance to al-Qaida, which often uses car bombs and appears bent on gaining a greater foothold in the Horn of Africa.
Click to expand...

AU troops fighting a tough war against Islamists in Somalia...

UN: Up to 3,000 AU Peacekeepers Killed in Somalia Since 2007
May 09, 2013  As many as 3,000 African Union peacekeepers have been killed in Somalia in recent years in an attempt to end an Islamist insurgency and bring stability to the Horn of Africa nation, a senior U.N. official said on Thursday.

I want to pay tribute to the countries and to their soldiers who paid such an enormously heavy price,'' U.N. Deputy Secretary-General Jan Eliasson told reporters. You would be shocked to learn that maybe it is up to 3,000 AMISOM [African Union Mission in Somalia] soldiers that have been killed during these years that AMISOM has been there,'' he said.

The 17,700-strong African Union force began deploying to Somalia in 2007. It includes troops from Burundi, Uganda, Kenya, Sierra Leone and Djibouti. Uganda, Burundi have paid a tremendous price,'' he added. The Kenyan troops are, of course, also a large part of AMISOM.'' By way of comparison, 3,096 U.N. peacekeepers have died since 1948, according to the website of the U.N. Department of Peacekeeping Operations. 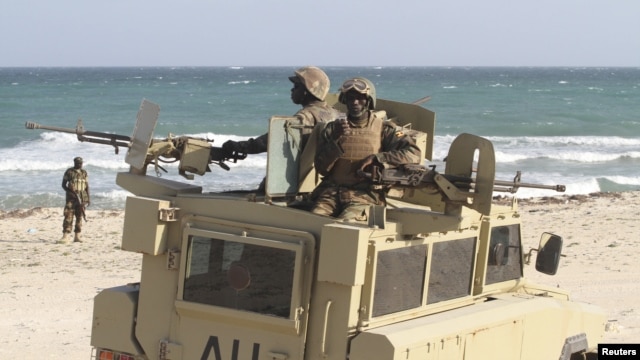 Peacekeepers from the African Union Mission in Somalia man weapons atop their Armoured Personnel Carrier after capturing the former private Elmaan seaport from al-Shabaab insurgents, 30km (19 miles) east of Mogadishu

Somalia is only just emerging from two decades of civil war. Its government is struggling to rebuild a country riven by clan divisions and whose infrastructure and institutions are in tatters. A newly appointed parliament last year elected a new president, the first vote of its kind since the toppling of former military dictator Mohamed Siad Barre in 1991.

African Union peacekeepers have been largely responsible for pushing al-Qaida-linked al Shabaab out of the capital Mogadishu and other urban centers in the past two years, but the group is still able to launch major attacks, including a suicide bombing on Sunday that killed at least eight people. Eliasson said on the sidelines of a donor conference in London earlier this week that sought pledges to rebuild Somalia that the United Nations has given strong backing to the country's new leadership.

Whenever you hear the names Dodd & Frank, economic disaster is the result

The religion of peace is at it again. Send them all back..

Humiliated by the Supreme Court
2

A moment ago
.oldschool
O

trump May Have to Self Publish Presidential Memoir
2

You can't be pregnant. I had a vasectomy. I can get a do-over

Biden praises Russia as a "great power": what does Putin have on Joe Biden?
2