An energy expert’s prediction in March that gasoline prices in New Mexico would dip to $1.65 a gallon has been proven true.

Fine said fuel prices in the United States are at their lowest levels since 1998, unadjusted for inflation. Fine attributed the low gasoline prices to soft market demand and excess supplies of crude oil.
The United States has more crude oil reserves than it has had since 1933, Fine said.

Fine said he’s not so sure crude oil prices will rise any time soon. He said there is a lot of anticipation about a Dec. 4 meeting of OPEC in Vienna, Austria.

“There’s a little excitement in the market about what the Saudi Arabian position might be on the 4th,” Fine said. “What’s reported out is some language about stability. So the speculators are buying oil today. But I am very skeptical that this will last.”

Fine, who has been critical of OPEC, said the oil cartel is creating an imbalance in the marketplace by over-producing while crude prices continue to drop.

Fine said many economists assumed Saudi Arabia’s state-owned oil producers would cut back production as crude oil prices plummeted, but he said that did no occur.

Fine said the Saudi Arabian strategy is to continue oil production in hopes production will lower in the United States. However, Fine said New Mexico oil producers produced 119 million barrels of crude oil in 2014.
“That is a record,” he said. “In 2005, it was about 60 million (barrels). As we produce, we displace Saudi imports.”
W

Uncle Ferd hopin' gas gonna get back down to a quarter a gallon...

Global crude prices have been falling for months, with the latest plunge coming as Iran renewed its pledge to boost its crude exports, adding to the glut of oil on the world market. Oil produced in the United States fell below $35 a barrel in early trading, although the price recovered somewhat in the hours afterward to reach $35.27. Brent crude drilled in the North Sea dropped as much as 3.5 percent, trading at $36.61 at one point, although it also moved a bit higher in later trading. 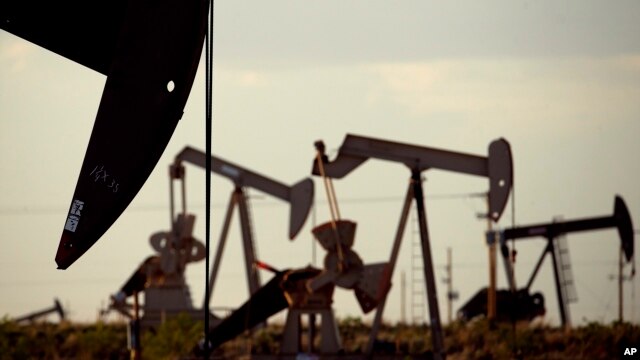 Pumpjacks bob in a field near Lovington, N.M. World oil prices, which have been declining, fell further Monday when Iran restated its plan to increase crude exports.​
Even with declining world prices, Iran's deputy oil minister, Amir Hossein Zamaninia, said there was "absolutely no chance" that Tehran would delay its plan to increase its oil exports. The Organization of the Petroleum Exporting Countries, whose 13 member nations produce about 35 percent of the world oil supply, has effectively abandoned oil production quotas, adding to the world oil glut.

The International Energy Agency says it expects the oil glut will extend to at least late 2016, with OPEC showing "renewed determination" to maximize its production. The cut in the price of crude on the world market has led to the lowest gasoline prices in several years for motorists in the United States. But the steady drop in prices has hindered economies in oil-producing countries dependent on oil revenues, such as Venezuela and Russia. Energy companies have had to scramble to pay bills and fund new operations and sometimes have laid off workers.

Slowing demand adds to high output to keep revenue streams up for OPEC...

Front-month U.S. West Texas Intermediate (WTI) futures CLc1 were trading at $36.83 per barrel at 0334 GMT, similar to Monday's close after a more than 3 percent fall. The international benchmark Brent LCOc1 was at $36.67 per barrel, virtually unchanged from its last settlement but less than a dollar away from an 11-year low hit earlier in December. Both contracts are down by two-thirds since prices started tumbling in June 2014. While global output has been at or near record highs, demand has so far held up, preventing oil prices from falling even lower, but that may be about to change.

Oil analysts JBC Energy said that oil product demand growth in Europe turned negative in October - a loss of 170,000 barrels per day (bpd) year-on-year - for the first time in 10 months and that diesel and gasoline demand growth in China, one of the strongest price supporters of the past year, was also slowing. "The demand situation does not support a return to a higher price environment," said derivatives exchange operator CME Group. "China is still decelerating. Growth in emerging markets is slow. Europe may grow 1 percent to 2 percent in real GDP terms, the U.S. a little better, and Japan a little less. No major demand surges here," it said. 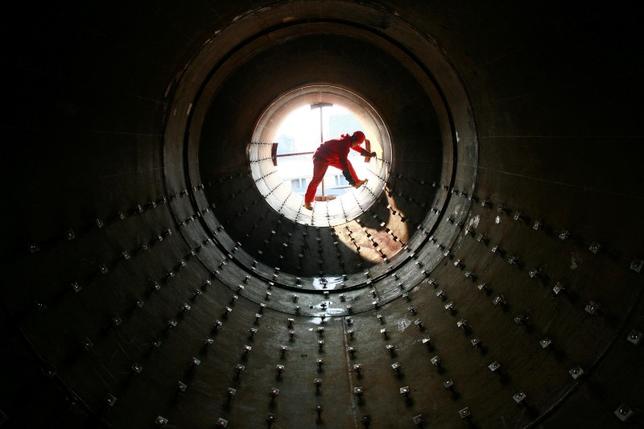 A worker checks steel pipes at an oil field preparing for oil and gas exploitation in Yilong, Sichuan province​
One change in oil trading has been that WTI flipped to a premium versus Brent CL-LCO1=R this month after the United States lifted a decades-old ban on exporting U.S. crude oil. Analysts expect this price structure to stay in place, especially should global markets suffer from slowing demand and a continuing oil surplus while domestic supplies in the United States tighten. "We expect (the) WTI-Brent spread to reach about $1, which was where spreads were before (the) U.S. ramped up its production," Singapore-based brokerage Phillip Futures said.

U.S. shale oil drilling soared from around 2010, but many producers have piled up huge amounts of debt and are now struggling to stay in business. "The ongoing low oil-price environment points furiously towards a rough 2016 for U.S. producers," oil analysis firm ClipperData said, with some estimates pointing to a 500,000 bpd fall in U.S. production in 2016. However, with most analysts estimating global output to exceed demand by that amount to perhaps more than 2 million bpd, even such a U.S. cut would not be enough to rebalance markets.

The retreat in oil prices cut short a rally in commodities and equities that had been fueled by better-than-feared Chinese trade data, which relieved concerns about the health of world's second-largest economy. Major U.S. indexes fell in morning trading after opening higher. The pan-European FTSEurofirst 300 index was up 0.3 percent. "People have seen in the past that these oil rallies have been very short, and to the extent they influence the equity markets, there is certainly some profit-taking going on," said Rick Meckler, president of LibertyView Capital Management in Jersey City, New Jersey. "People are selling every rally that is based on the movement of oil, because by the end of the day it can turn around and be down another 5 percent," Meckler said. Concern about a supply glut has helped drag down oil prices to 12-year low and crude dipped below $30 a barrel on Tuesday. 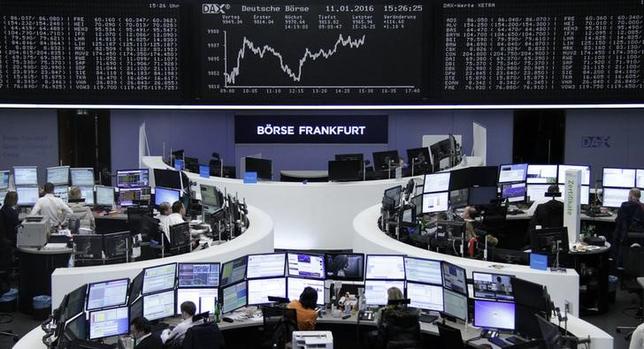 Traders work at their desks in front of the German share price index, DAX board, at the stock exchange in Frankfurt, Germany​
U.S. crude futures plunged as much as 4 percent, or $1.25 a barrel, following release of U.S. government data showing a large surge in gasoline and diesel stockpiles. Prices fell as low as $30.10 a barrel. U.S. crude prices were last up 1.2 percent at $30.75 a barrel, while benchmark Brent was down 0.5 percent at $30.73 a barrel. The Dow Jones industrial average fell 38.42 points, or 0.23 percent, at 16,477.8, the S&P 500 lost 2.88 points, or 0.15 percent, at 1,935.8 and the Nasdaq Composite dropped 21.76 points, or 0.46 percent, at 4,664.16. "The risk markets, near-term, are still going to be paying closest attention to the price of oil," said Mark Heppenstall, chief investment office of Penn Mutual Asset Management in Horsham, Pennsylvania. European shares were helped by a rise in Dutch insurer Aegon following a business update.

MSCI's broadest gauge of stocks globally rose 0.4 percent. Investors were also encouraged by data out of China. Exports from the country fell 1.4 percent from a year earlier, data from the General Administration of Customs showed. That was better than a Reuters poll forecast an 8-percent drop and moderated from November's 6.8-percent decline. The U.S. dollar was up 0.03 percent against a basket of currencies, while the euro was up 0.05 percent against the dollar. "The broader market tone is showing signs of tentative risk appetite, bolstered by continued stability in China's exchange rate and reinforced by the release of better-than-feared trade figures out of China," said Eric Theoret, currency strategist, at Scotiabank in Toronto. Benchmark 10-year U.S. Treasury notes fell 4/32 in price to yield 2.1137 percent, from 2.1 percent late on Tuesday.

Brent crude, the global benchmark, was down 37 cents at $30.49 a barrel at 1538 GMT. U.S. West Texas Intermediate crude (WTI) was down 30 cents at $30.13 a barrel. Both contracts saw intra-day highs of more than $1 above Tuesday's closing price on upbeat Chinese economic data earlier in the session. "Overall, it's a bearish report. I think today's inventory report is all about products...The long awaited massive decline in crude production is not starting again," said Dominic Chirichella, senior partner at Energy Management Institute in New York. 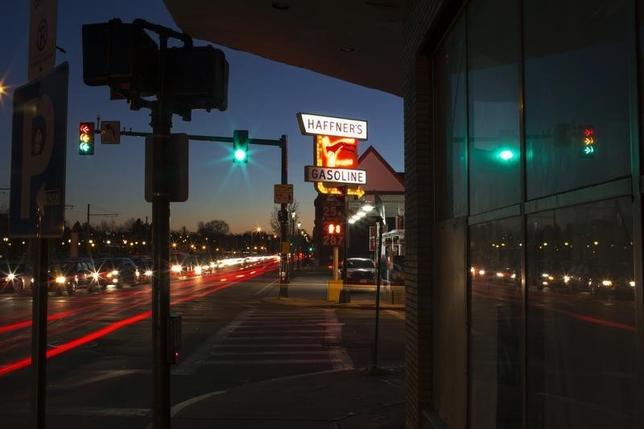 A sign for a Haffner's gas station is seen in Lowell, Massachusetts​
U.S. crude inventories rose by 234,000 barrels in the last week, compared with analysts' expectations for an increase of 2.5 million barrels, according to the government's Energy Information Administration. Analysts at Morgan Stanley warned on Wednesday that a rise in demand for crude could be lower than previously expected. "Any slowing in the rate of demand growth could delay the timing of rebalancing and ultimately a price recovery," they said in a research note.

The potential for the calling of an emergency OPEC meeting also weakened on Wednesday when Iran's oil minister was quoted as saying he had not received any request for such a gathering. Nigeria's oil minister said on Tuesday that a "couple" of OPEC members had asked for an emergency meeting. Days ahead of the expected implementation of a landmark nuclear accord between Tehran and world powers, Iran briefly detained a group of U.S. sailors after they entered Iranian waters. Iran released the sailors on Wednesday after holding them overnight, determining they had entered Iranian waters by mistake.

The sound and fury over a NASA authorization bill

A moment ago
Fed Starving

A moment ago
Sun Devil 92
S
N
The origin of the trinity doctrine.
2