“Will the national dynamics or the in-state dynamics prevail over the other?” 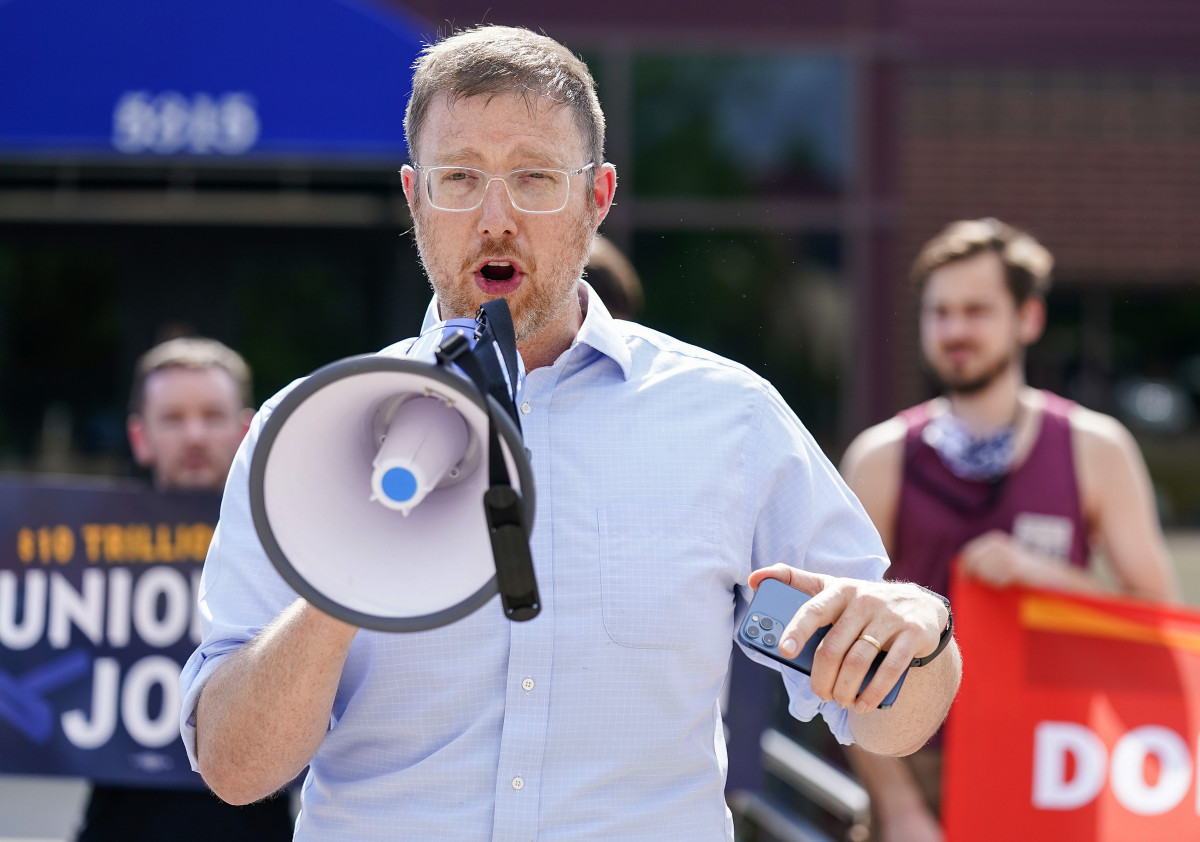 State party chair Ben Wikler has built a formidable fundraising and organizing operation ahead of a potentially tough midterm election.

Cavalier Johnson, Milwaukee’s Democratic acting mayor, is expected to glide to a full term on Tuesday. But he was still energetically rallying volunteers at a banquet hall this week — not just for his own race, but “for the big ones coming up in November.”

Wikler — a bespectacled 6-foot-4, with a notebook seemingly glued to his hand — has built a rare thing in the era of super PACs and dark money: making his state party not only relevant but a powerhouse of organizing and fundraising

Since taking over as chair in 2019, he’s raised nearly $100 million, believed to be a fundraising record for a Democratic state party, and helped President Joe Biden win the tipping point state of the 2020 election, which helped Democrats rebuild their Midwestern “blue wall.” Now, Wikler’s machine is facing its biggest test, one that will ripple into 2024. That’s why the party is using this moment as a critical warm-up exercise for the midterms.

“I see this election as a clash between the national momentum and atmosphere against us and everything in Wisconsin, more than I could’ve hoped for, breaking our way,” Wikler told POLITICO while seated in the back of a minivan, bumping down a two-lane road in rural Wisconsin. “An organizing machine, a party operation and candidates themselves, on the Democratic side, are bringing the party together and energizing people, and Republicans are involved in a civil war.”

“The question is: Will the national dynamics or the in-state dynamics prevail over the other?” Wikler continued. “It’ll probably tilt by a tiny bit, one way or the other.”

Wisconsin is trending dead-even. In 2016, former President Donald Trump won it by 23,000 votes. In 2020, Biden won it by 20,000 votes. Brian Reisinger, a top Republican consultant in the state, said Wisconsin Democrats “had their back broken during the [GOP Gov.] Scott Walker years, and they never got back up again until Ben Wikler came.”

On Johnson, Wikler said, they plan to “spend a lot more time talking to voters about how Johnson gave himself a tax cut and wants to repeal the Affordable Care Act than we do on mouthwash” — a reference to Johnson’s promotion of mouthwash as a defense against Covid-19.

Threats to democracy and disinformation around the pandemic are animating issues for the party and for the base but not part of its message to swing voters. “We talk about democracy a lot, it’s just not the center of TV ads and mailers,” Wikler said.

“If you care about democracy, talk about roads,” he added.

It’s a big strategy, and it requires a big bank account. Wikler, a former senior adviser at MoveOn and a podcast host, brought a national fundraising network to tap, as well as a fluency with Twitter that drove small-dollar donations. His long Twitter threads, unspooling the stakes and narratives around elections, often go viral. A single Twitter thread has raised six figures in small-dollar donations, he said.

In 2020, at the height of the coronavirus pandemic, the Democratic Party of Wisconsin hosted virtual, grassroots fundraisers that featured celebrity TV shows and movie reunions, including “The West Wing,” “Veep” and “Parks and Recreation.” Its biggest get, though, was a table reading of “The Princess Bride” with most of its original cast, a virtual event that raised $4.25 million.

At the same time, Wikler’s become a star of the high-dollar donor set. Scott Anderson, a Democratic strategist who coordinates major donors around state races, called Wikler “the best state chair in the country, and the drop off to the next tier is pretty steep.” Dmitri Mehlhorn, who works with LinkedIn co-founder Reid Hoffman on his political giving, said the “local Wisconsin operation is good enough to survive a national red wave … and that’s because of Ben.”

“He’s completely redefined what a party chair, what a state party, can be,” said Mike Tate, Wikler’s predecessor as chair from 2009 to 2015, who credited Wikler for maximizing fundraising from big and small donors alike.

It’s a far cry from where Wikler’s fundraising career started: at a park in Madison, Wis., for an event benefiting then-state Rep. Tammy Baldwin’s 1998 run for Congress. Four people showed up, including Wikler and Baldwin.

If it looks, swims, and quacks like a duck, it's a duck.

www.cnsnews.com
In total, Mark Zuckerberg bankrolled the non-profit organization to deliver $350 million to nearly 2,500 election departments across the country.

So Zuckerberg and the other Biden Crime Family oligarchs, like Twitter's Jack Dorsey, delivered the 2020 election to Biden. I see Biden and the dems are not moving forward with Section 230 repeal. So the oligarchs have no checks and balances. The US political system is owned by the oligarchs.

Zuckbucks? that played a part, i'm sure
You must log in or register to reply here.

How many seats in Congress will the Democrats lose in the midterms?

now that they know they will lose badly in the House...The Democratic Party’s emerging priority: Save governors, & for Soros, the Secretaries of State

In Colorado, incumbent Sen Michael Bennet braces for another red wave in a state Biden won by 13 points, not a good sign for Democrats in the midterms

Why Did Trump Take The Presidential Documents When He Left Office?
15 16 17

The most common sense approach to Climate Change

Why won’t Merrick Garland release the affidavit for the Mar A Lago invasion?
45 46 47