Why is Turkey Fighting Syria’s Kurds? 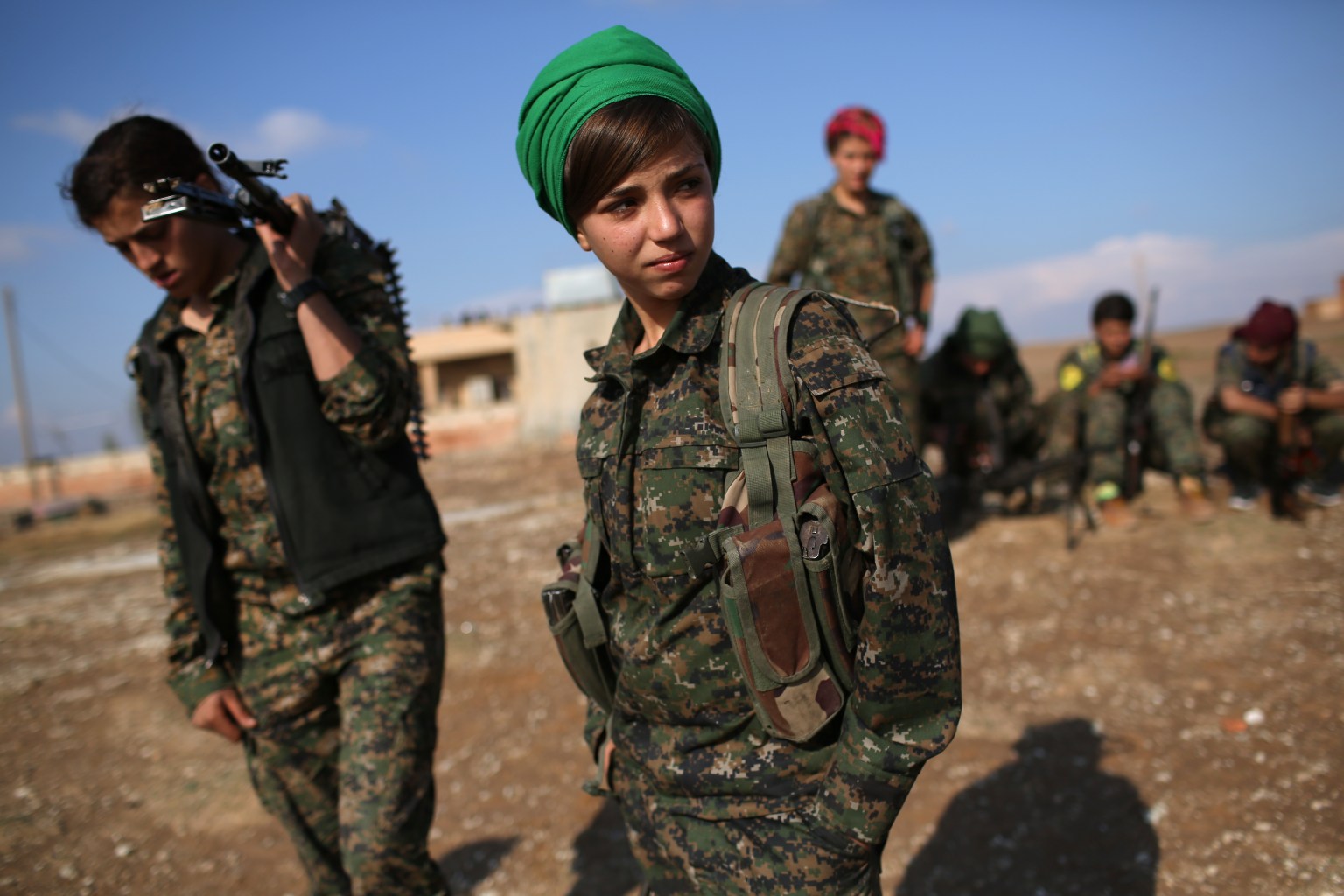 The Kurdistan Workers’ Party, known by the Kurdish acronym PKK, was founded as a Marxist-Leninist group in Turkey in 1978 in response to state-backed discrimination against Turkish Kurds, with the goal of creating an independent Kurdistan. A PKK insurgency against the Turkish state began in 1984, and fighting between the two sides has continued intermittently ever since, accompanied by heavy-handed Turkish repression in Kurdish areas, resulting in the deaths of more than 40,000 people, a majority of them Kurdish civilians. The PKK, for its part, has focused its attacks on the Turkish military over the years, but it has also hit civilian targets. Turkey and the United States have both designated the PKK a terrorist organization.

And, according to this, the Kurds first emerged in the 10th century. A majority of Kurds belong to the Shafi‘i school of Sunni Islam, but significant numbers practise Shia Islam and Alevism, while some are adherents of Yarsanism, Yazidism, Zoroastrianism and Christianity.

This then goes on to identify the SDF and it’s efforts to fight ISIS and avoiding being linked with the PKK. Turkey claims it is.

Worth reading to help understand what’s going on in the region and why Syria is rushing to the aid of the Kurds in its territory.

The Orange Shitgibbon sold them out.

Nobody gave two shits till the Jews did.

Tijn Von Ingersleben said:
Nobody gave two shits till the Jews did.
Click to expand...

All the white women in america currently flooding their social media with photos of themselves like, literally crying for the Kurdish people had never heard of Kurds until yesterday

Tijn Von Ingersleben said:
Nobody gave two shits till the Jews did.
Click to expand...

All the white women in america currently flooding their social media with photos of themselves like, literally crying for the Kurdish people had never heard of Kurds until yesterday
Click to expand...

And we helped them get territory.
What contract did we sign that says we are now their permanent baby sitters?
P

The PKK don't represent the majority of Kurds; they maybe represent less than a third, but yes, they're a problem. The main problem for Trump is Turkey is a NATO ally a complication, and we have no treaty with the Kurds and no agreement to help them obtain a homeland, and have backed Turkey's claims via NATO in the past that they are a terrorist organization. We also have bigger fish to fry in the Gulf, and need to be there at the moment. I'm not personally happy about the way we left, but it also isn't the atrocity we committed by suddenly dumping South Viet Nam in 1975, either, leaving those people to be looted and murdered and forced into labor camps over a snit fit re Watergate. It sends a bad message to other allies.
P

Of course, the Democrat fascists' sudden interest in being involved in the ME is just shallow knee jerk TDS stupidity nobody takes seriously.
C

Not everyone in Turkey is turk. Similarly not everyone in North Syria and North Iraq is kurd. People don't come from a pure race. Hundreds of thousands of people in Turkey do not accept this fact. ( Unfortunately, this is a general racism problem and it is present in many countries.)

Why United States. doesn't protect northern Syria? Because these events benefit all the forces in the region.

Turkey, Russia, United States, European union, China, England and Israel in humanoid machines ( important people who are not moved by emotions ) long term target unifying Kurdish politics in the region under the rule of northern Iraq ( Including the south eastern region of Turkey. )

The source of this terror problem in Turkey is the disproportionate use of force in prisons in the east during the 1980 COUP. ( It's not just stupidity, Yes, there are serious fools, but some of those who do unacceptable things like torture in the East know where the tortures are going.)

Powerful states have wanted a Kurdish state in the Middle East since the 1900s. Why?

Create to an alternative culturel, soldier force.
From East to west, from west to east, so that shipping can be more cheap.
A low-cost military force for United Nations Security Council countries in the Middle East and Asia events .
Permanent expansion of Russia to the Mediterranean ( This is not a problem for the United States.)


Mediterranean societies are weak in making progress in a stable and disciplined way for themselves and other people.You can see this problem especially when you take Greece, Turkey and the countries of the Middle East in the south in general terms. In addition to this climate impact, greater problems arise when cultural and religious troubles combine.

Life in the east of Turkey in general is quite boring.and not efficiently. ( Not only South East, all east of Turkey. ) It's incredibly cold in winter, Summer is incredibly hot during (together with low humidity ) the day and cold at night. Limited commercial investment is available only in urban centres. In many of the villages, the population has fallen incredibly. For this reason, the economic and physical power and facilities of the municipalities of the district, to which the villages are connected, fell considerably.

This is because a small number of people living and growing in this area are unable to keep up with new living standards. (If individual do not show much dedication ) . Turkey's society is a society that does not have very healthy relations with each other when it does not have problems from outside. People start with incredible intimacy and then it turns into serious thoughts, petulance, problems, gossip, fights. Many factors are included : ideological, ethnic identity - based , family-related, commercial-heritage issues, sex and economic status.

In Turkey, this problem is not at a very extreme level, but it is not as serious as in Turkey, but there are this problems in many countries in the world. Where living standards and education are low, what is there? Free sex with your partner (without a condom). As everywhere else, people in Turkey, who are in worse conditions both in terms of education and economically are having more children. Turkey has two group that have the most children. Kurds and conservative Muslim Turks.

Although not as tragic as in the East, his people development and lifestyle in the central Anatolia region are not good. Therefore, the expected Sunni-Shiite war in the Middle East. Because of the problems that Turkey cannot solve as a society, Turkish society will not be exempt from this collapse. Severe droughts are expected in the Middle East ( including the east of Turkey ) in the long term. Given radicalism, religious or racial conservatism in the general sense of Sunni, Shia Muslims and Kurds. The western and southern coastline of Turkey different in this regard. Past to present, society migrated to coastal cities.

In time, the poor and radical people living in the coastal areas will have to migrate to Anatolia or the East if they cannot solve their economic and ideological problems.

what am I thinking: understanding people and the terror, decline and fear that arises from it. my family Alevite. I agnostic.I don't want to be considered an Alevite nationalist now because i not muslim, but the Kurds have more rights in Turkey than the Alevis have. In Turkey, a Kurd can practically be president by taking everyone's vote, but can't be alevi. ( In theory, there are no obstacles within the Kurdish or Turkish Alevite. )
Last edited: Dec 6, 2019

Don’t worry, if you study history you’ll know that Kurds are no strangers to selling out others. It’s a cosmic form of just desserts.
You must log in or register to reply here.

The problem with the Democrats is they don't love
2

How do republicans make sense of Trump wanting to push for another round of stimulus payments yet pretends COVID isn’t a crisis?
2 3