8. Now…..how can we compare the iniquity of the Democrat Party to the actions of the finest President on over a century?

In 1984, President Reagan ordered the Director of Central Intelligence to develop “capabilities for the pre-emptive neutralization of anti-American terrorist groups which plan, support, or conduct hostile terrorist acts against U.S. citizens, interests, and property overseas.”
The President further ordered the DCI to “develop a clandestine service capability, using all lawful means, for effective response overseas against terrorist acts commmitted against U.S. citizens, facilities, or interests.”

Those instructions were contained in National Security Decision Directive 138, “Combatting Terrorism,” which was issued on April 3, 1984.

A few weeks earlier, Hezbollah forces in Lebanon had kidnapped William Buckley, the CIA station chief in Beirut.
NSDD 138 remained classified for many years and was not fully declassified until two years into the Obama Administration.
Categories: Secrecy
Categories: Secrecy
Reagan Directive on "Pre-emptive Neutralization" of Terrorists

You can see the classified version of it here: https://irp.fas.org/offdocs/nsdd/nsdd-138.pdf

And to whose benefit???

"Here at home, the [Democrat] Obama administration has gravely impaired our capability to gather human intelligence by declassifying hundreds of pages of documents that explain our interrogation techniques—information that is now probably in al-Qaeda training manuals." 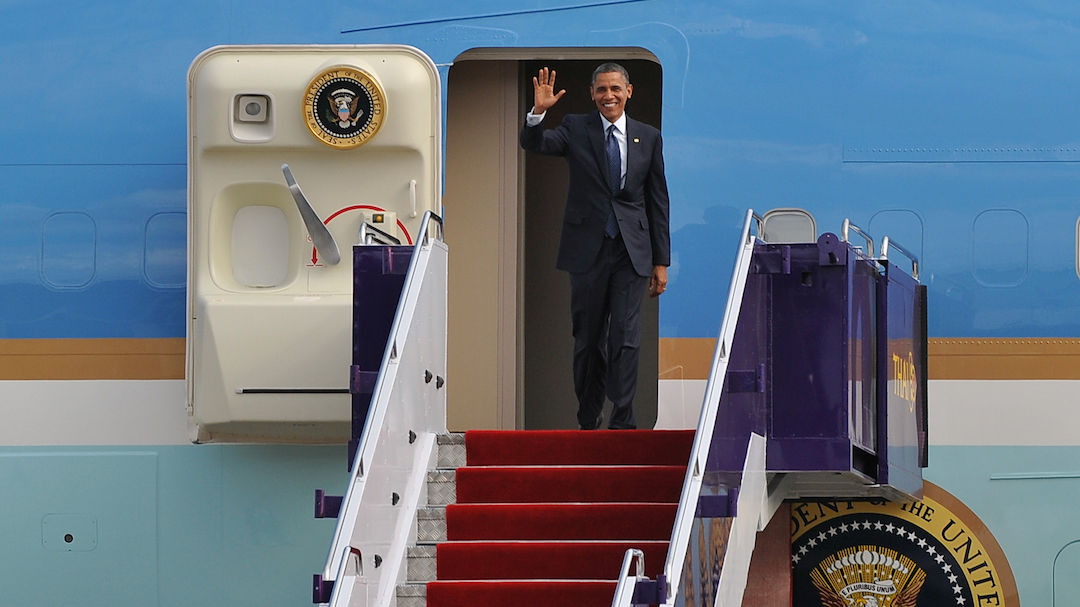 This image of President Obama standing above his country and above the world sums up the post-American way of thinking.
imprimis.hillsdale.edu

Just one small part of the Liberal/Progressive Democrat anti-America cabal.
People are most conservative on issues that they know most about. --Ann Coulter

PoliticalChic said:
Isn't it a legitimate query to one who, I am certain, considers himself articulate and intelligent?


Shouldn't you be able to defend your position????

I always can, mine.

I challenge you to

a. find any error in that post or any of the rest I have planned.

b. author a similar one indicting the Republicans

c. Or admit you are a lying low-life, if you can do neither.

“A conspiracy theorist is a person who tacitly admits that they have insufficient data to prove their points.
— Neil deGrasse Tyson
OP

You and I both know you're embarrassed.
You wish you had a cogent resonse to those questions.

9. This might be a good time to remind all the simpletons who try to claim any association between the Right and the Kremlin, that the “Liberal Lion,” murderer and Democrat candidate for president, actually offered to work for the Russians against the American government.

“In 1983, Sen. Edward M. Kennedy offered to help the Soviets mount a public-relations offensive in the United States. This propaganda attack would target President Reagan and his policies. These are the same policies that eventually ended the Cold War and reduced the possibility of nuclear annihilation. … validate reports that were first published by Vasili Mitrokhin — the former KGB historian who secretly copied sensitive KGB files and released them after the fall of the Soviet Union.
According to this research and released KGB papers, Mr. Kennedy felt that the booming economy during Mr. Reagan's presidency made him popular — and thus a difficult target for Democratic criticism.

….Kennedy felt the Soviets might be of assistance, if Mr. Kennedy and the Democrats could get the ear of the general-secretary of the Communist Party of the Soviet Union.
… this anti-Reagan/anti-U.S. conspiracy was not a one-man operation by Mr. Kennedy. They indicate that former Sen. John V. Tunney, a California Democrat, went to Moscow and met with officials of the KGB on Mr. Kennedy's behalf. Additionally, in their book "The Sword And The Shield," Christopher Andrew and Vasili Metrokhin said that as early as 1975 the KGB began operations to penetrate the inner circles of a number of leading Democrats, including the likes of Mr. Kennedy and Ramsey Clark. They also mentioned that a Democratic Party activist had been recruited by the KGB and had supplied the Soviets with information from a variety of Democratic leaders, including President Carter.


… after Mr. Reagan left office, Mr. Tunney said that he had indeed contacted the Soviets on behalf of several U.S. senators — not just Mr. Kennedy. So, the question is, did some of the Democratic Party leadership offer to work with the Soviet KGB against Mr. Reagan? If so, were they later blackmailed into working for the KGB and against the United States on other fronts? How many Democratic politicians were compromised and later blackmailed? Lastly, if they were controlled by the Soviets, are they now "influenced" by the Russians? Inquiring minds want to know.
http://forum.gon.com/archive/index.php/t-100151.html


And, of course, another of your candidates worked with the Kremlin to produce the bogus dossier, designed to sink Trump.

It appears that they are secrets only to lamebrains who vote Democrat.
People are most conservative on issues that they know most about. --Ann Coulter
OP

To know what the Left is guilty of, just watch what they blame the other side of doing.

2a. If not for double standards Liberals would have no standards at all.


For years, Democrats and their allies claimed that Trump worked with the Kremlin….then we learned that it was Democrat Hillary Clinton who conspired with the Russians to produce the bogus dossier.

Republicans like Reagan, and Trump, were always opponents of communists, and terrorists, and we saw same in Trump’s ending Soleimani’s attacks on American soldiers, and Trump’s warning to the Afghanistan terrorist and his plan to leave:

Former Trump secretary of state Mike Pompeo has expressed disappointment with the Biden administration over its chaotic withdrawal from Afghanistan, and criticised the White House’s reported pleading with the Taliban* not to attack the US Embassy if they take Kabul.

Asked how the Trump administration would have proceeded with the withdrawal, Pompeo stressed that the administration had “conditions attached to how we were thinking about this withdrawal,” and that he personally was “part of those negotiations.”

“I was also in the room when President Trump made very clear to Mullah Baradar, the senior Taliban negotiator, that if ya threaten an American, if you scared an American, certainly if you hurt an American, that we would bring all American power to bear to make sure that we went to your village, to your house. We were very clear about the things that we were prepared to do to protect American lives,” the former diplomat, who also previously served as Trump’s CIA chief, said.” Pompeo Says Trump Warned Taliban That US Would Attack Militants’ Villages if They Harmed Americans

Which party is lookin’ out for America and Americans?

It’s crystal clear.
People are most conservative on issues that they know most about. --Ann Coulter
You must log in or register to reply here.

3 Times Biden Said He Would NOT Mandate The Vaccine

Where Did He Get That Idea?

Dems Tough Choice in Missouri 1st District: Re-elect Squad member Cori Bush despite her far-out views? Or vote for her challenger despite his baggage?

Republicans- Do You Really Think A Midterm Victory Is Going To Change Anything?
2