What was the best in-flight meal to you? 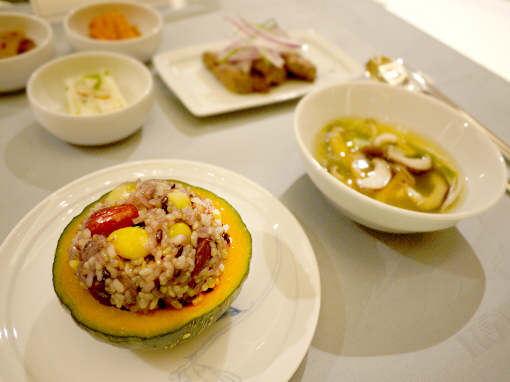 Korean Air unveiled its new in-flight meal of dongchimi guksoo (cold noodle soup with radish water kimchi), and yeongyangbap (steamed grains and rice) The meal will be offered from next month to first and prestige class passengers on long-haul flights to the US and Europe. Korean food due to its unique ingredients and scent, can be used in a limited manner for in-flight meals.

But Korean Air is making efforts to develop new menu items to spread the popularity of Korean food throughout the world. Dongchimi receives the most attention. Korean Air has served just white kimchi (kimchi without red pepper powder) due to the sensitivity of foreign passengers to smell. Since demand is growing to increase the diversity of kimchi on the menu, Korean air chose white kimchi because it is a traditional food that is not eaten daily.

Korean air offers bibimbap, samgyetang (ginseng chicken soup), ox tail soup, steamed rice with Gondrae herb and crab marinated in soy sauce since 1997. Korean Air has received many awards for best quality in-flight meals since 1998. If you ever get a chance to fly Korean Air, I recommend that you try some in-flight Korean meals.

Wow that sounds incredible. I am definitely going to try that soon!
The only slightly acceptable meal i had during a flight was actually with Nicky from Tel Aviv to Vienna.
I don't quite remember what it was but I know it tasted way better than usual airline food.
If opportunity doesnt knock, build a door.  Milton Berle
P

I don't fly and never will until the Mcdonald's workers stop grabbing people's junk. If everyone did the same it would stop.
You must log in or register to reply here.

AR vs AK vs Mosin Nagant

This IS What Sacrifice IS

R
What would you do if you gain $20 Trillion?

Obamas comments to get democrats a win in Virginia
2

Arabic Writing Was Penned by a Christian
8 9 10