Individuals are allowed only one (1) account. Anyone found to be in violation risk having all accounts banned.

We Now are operating the site under 3 different zones. General site rules apply except where individual zone rules take precedent.

All members and staff have the right to their own ideas, beliefs and faiths. Members have the right to constructively express these on USMessageBoard.com with equal respect and consideration. If you have a specific question/comment about these guidelines, Please PM a Moderator of your choice. Thank you and enjoy the forums!
Last edited by a moderator: Nov 23, 2020
A Lion doesn't concern himself with the opinions of a sheep.​
​
OP

Many members have had some questions and concerns as to the rules and the enforcement of those rules. This doesn't answer all of the questions, nor can it, the 'moderator discretion' aspect is a nebulous but necessary tool, as some situations arise where no hard, fast rule exists or can exist without it becoming draconian in nature. This will give everyone a better idea of what to look for.

One:
A member can not infer another member engages in an act of beastiality in any forum

Two:
No, we Moderators cannot read your PMs unless those specific PMs are reported to us.

Three:
Accusing, insinuating or alluding to another poster as a pedophile is NOT allowed. If you think someone is a pedophile and you think you can prove it then call law enforcement, .

Four:
Selective quoting is not the same as modifying quotes and the quote in question will only be considered modified if the original posters user name is attached to it.

Five:
If you constantly attack another poster or an opposing side then you should be prepared to be neg repped, a lot and it is NOT considered abuse of the rep system. If, however you post a simple, how are you, isn't it a nice day type of post and someone neg reps it that IS abuse of the system and if it is reported we will do as the rules state.

Six:
Everyone here will be treated equally, no one will be granted special protection or unduly singled out for any reason. The board Rules and Guidelines apply to everyone, that means if someone can't hack it here they need to find someplace that better fits their temperament. It also means that if someone is found to be attempting to disrupt or undermine the board and it's members, that person will be given the opportunity to find another site to post on.

Seven:
Discussing administrators, moderators and rules in general on the open forum is not a violation of the rules. However, bringing a specific mod action or specifics of a mod action into the open forum IS a violation of the rules and will be dealt with accordingly. PLEASE NOTE: If a mod/admin thread (or any thread for that matter) has degenerated into nothing more than pissing, moaning, demeaning, degrading and insulting staff we will close and/or trash the thread in question at our discretion as indicated in the Rules and Guidelines.

Eight:
I know there have been some questions and concerns about supposed arbitrary mod actions recently, if you have a specific issue with it then contact the Admin personnel via PM and they will review it to determine if it's arbitrary as claimed or not, based entirely on the governing Rules and Guidelines.
All official moderator actions will be in red, all unofficial moderator suggestions are that only, suggestions, and not subject to moderator action, warnings, infractions or banning regardless of what color it is though, in order to alleviate any confusion non-official suggestions should be typed as normal, in black.

Nine:
Socks. If you think someone is a sock by all means report it, we will investigate using the tools at our disposal. If that poster is still around after that then we were unable to determine that poster was a sock and there is no need to continually harangue us over it, I don't care what you believe. Proof, not suspicion is the key.

Ten:
Patience on your parts and a little help will do more to ease this transition and make the board run smoothly than anything else. We will however not tolerate the manipulative little children's games some seem to have a propensity to indulge in at our expense. If we catch you doing it you'll get a vacation, if it happens again you get your permanent relocation notice.
Click to expand...

Last order of business is signature sizes. Below you will find the differences in allowable signature sizes depending on ones user group. We do ask that you please remain compliant when it comes to how many lines you use in your signature. If staff request that your signature fall into the acceptable parameters for your user group you will have 4-6 hours to change it. Failure to comply will result in the sig being removed for you.

A Lion doesn't concern himself with the opinions of a sheep.​
​

About "Specific Topical Content' in the USMB Zone2 Rules

What makes the rules and moderation unique at USMB is our focus on getting good discussions without making a lot of judgments on what is acceptable content and what is not. Good discussions can be contentious and nasty. They may contain very controversial subjects or words that other sites fret over. All we want is that each thread has a topic and that there is enough coherent discussion for folks to learn and enjoy reading the topics. If you just want to rumble and rant -- get a Twitter account. Like the professional rumblers do.

Or use our World Famous (members only) Taunting Areas - where acting as a responsible caring human being is optional.

We provide 3 Zones for EVERY level of discussion. From heavily moderated Civil Discussion in Zone1 -- all the way to very adult satire and flaming in the Zone3 Taunting Forums. In BETWEEN those two -- now sits Zone2, the vast majority of USMB forums. A lot of these forums are very contentious and are the topics you are warned about NOT discussing at Thanksgiving or Christmas dinner with your own family -- like Politics, Religion, Environment, Race or Israel/Palestine. Some others are "rest and relaxation" areas that are not really expected to GET violently personal or contentious. Shouldn't be large squabbles breaking out in the Gardening or Music forums -- but it HAS happened. Courtesy and common sense should be expected.

So here are guidelines for complying with the moderation guidelines of keeping threads and discussions centered on "specific topical content".
If you respect the topics and their boundaries and you are contributing to the discussion in every post, you should not ever have a issue with the Zone2 "topical content" rule. However, remember the Site Wide rules apply in every forum and in them are the only specified prohibitions that thou shall not post.

If you don't intend to have completely civil, flame-less, and profanity free discussions, don't post in Zone1. Take all member confrontations to the Zone3 Taunting Zone forums. There's a place for everything at USMB.

If you understand the Posting Guidelines (rules) and this guide to complying, you'll hardly ever have an issue with moderation warnings, penalties, or content deletion on USMB. It's simple. It's common sense. And it's vital to make USMB a place where discussions are readable and sometimes educational.

For the convenience of Members, we're adding a "Zone Map" here so that new members will have an understanding of the Board layout and what USMB Moderation is looking at DIFFERENTLY in each Zone..

Always read the "sticky threads" at the top of every forum listing page for additional guidance and clarification. 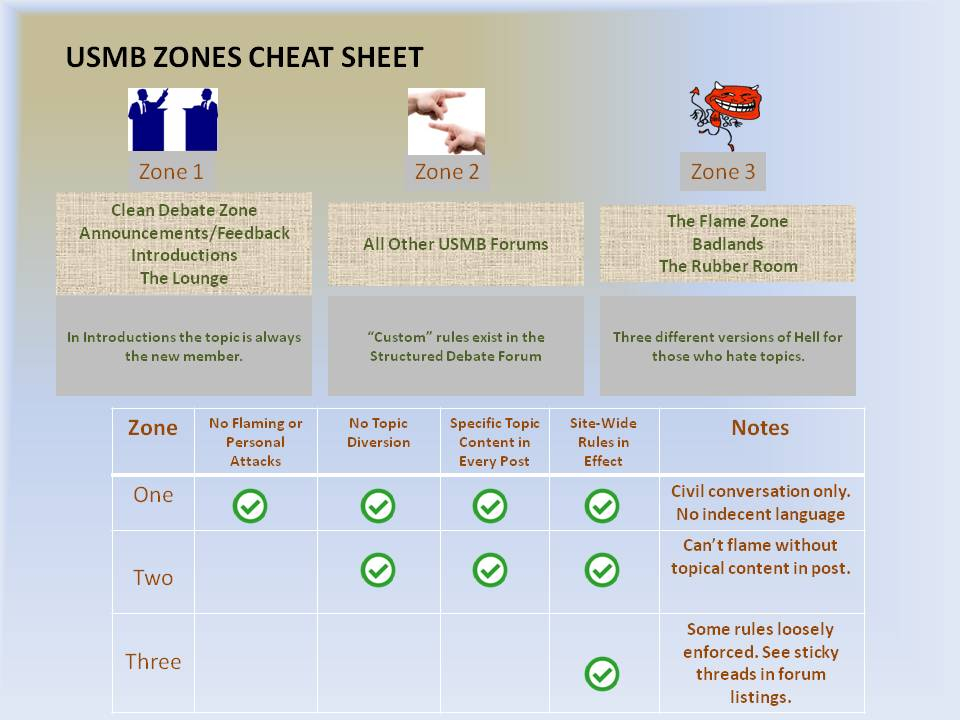 Debate Now (Invite Only) Alright Slade, I Want To Get To Know You Better

Poll: majority now believe that Joe Biden is kind of an idiot
5 6 7