Of course he is. After all Rick Scott and Medicare fraud go hand in hand. Another crook in a leadership position. And of course he is will tax the poor 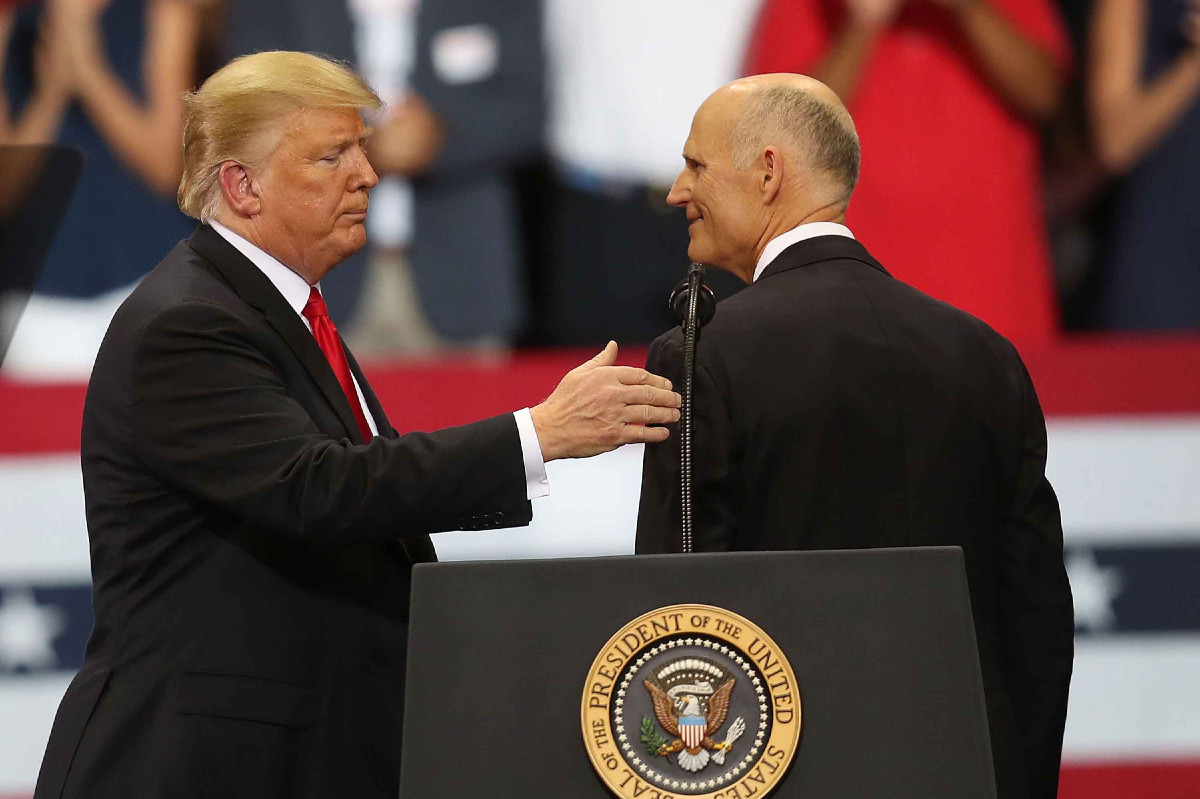 In a recent private meeting at Mar-a-Lago, Donald Trump made a personal pitch to Senate Republican campaign chief Rick Scott. “You should run for Senate majority leader,” he told the National Republican Senatorial Committee, according to a person familiar with the exchange.

It wasn’t the first time, either: Trump has repeatedly told Scott he’d be great at the job and should challenge Mitch McConnell, multiple people with knowledge of the interactions told POLITICO. The Florida Republican didn’t tell Trump “no” that day — though he’s told reporters that he supports McConnell for leader. Instead, Scott quickly pivoted to the reason for his meeting.

“We have to focus on winning” the Senate, Scott told Trump. “My only focus is on winning.”

“Rick Scott doesn’t give a fuck about what McConnell world thinks,” said one senior Republican official who’s not in either camp but has observed the back and forth between them closely.

Scott’s spokesman CHRIS HARTLINE had a different take, one McConnell’s team also endorsed: “Chairman Scott and Leader McConnell are working hand in hand to win back the Senate in November.”
W

Love the idea. Mitch is a neocon elitist, a globalist and a supreme asshole. He needs to go. Then again, you could say the same thing about that whining pussy, Kevin McCarthy.

Trump should know better than that.

The 'enemy of my enemy' is as American as fomenting coups.

Besides, who in their right mind doesn't despise McConnell?

His skeptics say he’s putting his own political ambitions above his mandate of capturing the Senate. The argument is that his midterm agenda plays great among the base, but at the risk of alienating independent voters needed to flip the chamber. McConnell has a track record of winning campaigns, they add, and Scott should follow his lead.

Not surprised that the former POTUS backs Scott…
Leading up to the 1994 election the founding members of the Blue Dogs felt that they had been 'choked blue' by the extremes of both political parties.

“He who establishes his argument by noise and command shows that his reason is weak.”
Michel de Montaigne

Does Orange Guy know about the hundreds of times that Rick Scott took the 5th in the witness chair? Only criminals do that, Trump said.
THANOS WAS RIGHT​
May, 2020:

I don’t have a vested interest in the fight but anyone is better than Mitch. The man is so hung up on the procedural process he is ineffective. As for the Pub’s, they would be better served by becoming direct and delivering what they promise. I will give the Dimbo’s credit, when they say we are going to change the direction of the nation you had better believe it!
Celer, Silens, Mortalis

is Trump the leader of the Republican party?

Rick Scott: the voters are!

wamose said:
Love the idea. Mitch is a neocon elitist, a globalist and a supreme asshole. He needs to go. Then again, you could say the same thing about that whining pussy, Kevin McCarthy.
Click to expand...

Rick Scott defrauded medicare out of $20 billion dollars.
You must log in or register to reply here.

‘If Trump doesn't run, I think everybody runs’: Hawley and Cruz choose their paths...Cruz...

get a big bag of popcorn, liberals: "McConnell clashes with Rick Scott over agenda", after Trump came out for Scott as Majority Leader replacing Mitch
2 3 4

Rick Scott on 11-Point Plan with 128 Promises from Republicans: ‘We Win Elections by Having Plans’: "We will name the wall after Donald Trump"

Republicans Have No Plan to Fix Inflation
35 36 37

At Least We Can Stop Talking About Colin Kaepernick Now...

Next on the Chopping Block - Same Sex Marriage
2 3 4

And thus ended the political career of Trump... Evangelicals can now discard him...
11 12 13