Trapped between Assad and ISIS

With Assad's ruthless military bombardments on the one side and ISIS's attempts to subjugate them under a harsh and oppressive "caliphate" on the other the residents who remain in Aleppo truly are living through a particularly nasty hell.

Why Unseating Assad Risks Unleashing Even More Chaos
April 11, 2017 — The statement by U.S. Secretary of State Rex Tillerson that the reign of President Bashar Assad's family "is coming to an end'' suggests the U.S. is taking a much more aggressive approach about the Syrian leader.

The remark Tuesday came after a U.S. airstrike in Syria and threats of more punitive action. Any attempt to unseat Assad faces huge hurdles and risks unleashing chaos. It could also relieve the suffering of nearly 1 million Syrians living under constant siege and bombardment. Despite six years of civil war, Assad is firmly entrenched in his seat of power, Damascus, largely thanks to powerful allies Russia and Iran who continue to prop up his government politically and militarily. Taking him out of the equation without a clear transition plan would be a major gamble with consequences that would likely resonate far beyond the Syrian borders and raises the following questions:

What is the U.S. Position on Assad?

The past week has brought about an almost seismic shift in the U.S. administration's position on Syria. Only weeks earlier, U.S. officials, including President Donald Trump, were signaling a willingness to work with Russia and saying that Assad's status was not a priority for the time being. The April 4 chemical weapons attack that killed more than 80 people in an opposition-held town in northern Syria appears to have completely altered Trump's calculus, triggering the first direct U.S. airstrike on Assad's forces in the conflict. 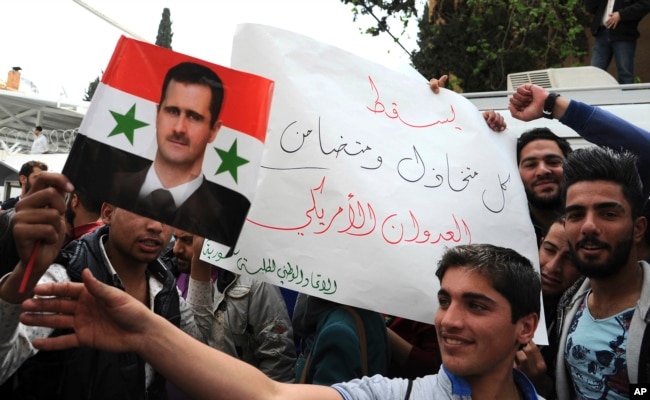 Pro-government protesters hold a portrait of President Bashar Assad and a placard that reads, "Down with everyone who cooperated and supported the American aggression," during a protest against the U.S. attack on a military airbase last week, in front the the U.N. building, in Damascus​
The Trump administration continues to offer mixed messages about its ultimate goal in Syria and whether Assad must surrender power — and when. "It is clear to all of us that the reign of the Assad family is coming to an end,'' Tillerson said. "But the question of how that ends and the transition itself could be very important in our view to the durability, the stability inside of a unified Syria.''

What is the Assad Family's Power Base?

The Assad family has ruled Syria for nearly five decades. So entrenched is the dynasty that die-hard supporters label the country as "Assad's Syria.'' In battle zones, loyal fighters have sprayed "Assad, or we burn the country.'' Despite the spectacular devastation he has presided over, Assad has managed to retain a level of support. He maintained, from the beginning, that his war is one against terrorism, and through a deft policy of divide and conquer, he has made the war a choice between him and the Islamic extremists. Russian President Vladimir Putin, center, shakes hand with Syrian President Bashar Assad as Russian Foreign Minister Sergey Lavrov, right, looks on in the Kremlin in Moscow​
Among his supporters are members of his Alawite sect, as well as other minority sects such as the Christians and Druze who fear reprisals by extremists in case they take over the country. Many in the powerful business community also support Assad and see him as a source of stability compared to other, opposition-held parts of Syria that are run by scores of rebel factions and warlords. Syria's powerful security agencies, notorious for human rights abuses, also will back Assad until the end.

What are the Alternatives to Assad?
Click to expand...

parsa92 said:
With Assad's ruthless military bombardments on the one side and ISIS's attempts to subjugate them under a harsh and oppressive "caliphate" on the other the residents who remain in Aleppo truly are living through a particularly nasty hell.

And?
Whose side am I on? The truths. I'm a realist. I see all sides.

Just because I stopped arguing with you doesn't mean you won. It just means I had better things to do with my time then to argue with a brick wall.
Trump Town | An Open Social Network For Pro-Trump Americans
BlazeTV

Looks like these women belong in the Lunatic Asylum along with the men. British women who joined Is

For all of you running to support Alec Baldwin, listen to this
7 8 9

JUDGE: Those Allegedly Shot By Rittenhouse Can’t Be Called ‘Victims’ During Trial, ‘Rioters’ And ‘Arsonists’ Both More Accurate
2 3 4

A moment ago
YoursTruly