Thread of ASTRONOMY FUN in general

Any cosmic thoughts you have about stars, moons, planets, aliens, galaxies, etc.......share it here. I intend this thread as an outer space free-for-all.

Even if a person is completely skeptical about complex alien life elsewhere in the universe, please allow me to convince you by reading this post: based on the gargantuan numbers and common FACTS we've learned about the universe, in this observable universe of trillions of galaxies, our own Milky Way galaxy has 200 billions stars in it. We now know for a FACT that most stars have a system of multiple planets around them, including rocky, Earth-like planets. And the majority of stars are somewhat similar to our yellow sun but a bit smaller & dimmer. So even if only 1 in 1000 solar systems in our galaxy have an earth-like planet that spawned complex life conditions - you're talking 200 MILLION Earths in our galaxy alone. Even if it's 1 in 100,000 that's 2 million alien Earths in this galaxy alone.

Interestingly enough, I start my first science lecture with Intro to Astronomy this Monday.

SixFoot said:
Interestingly enough, I start my first science lecture with Intro to Astronomy this Monday.

All the best wishes, sir.
W

Astronomers Find Stars That Appear Older Than The Universe...

The Greatest Cosmic Puzzle: Astronomers Find Stars That Appear Older Than The Universe
Sep 7, 2017 - Starts With A Bang: The Universe is out there, waiting for you to discover it

If you understand how stars work, you can observe the physical properties of one of them and extrapolate its age, and know when it had to have been born. Stars undergo a lot of changes as they age: their radius, luminosity, and temperature all evolve as they burn through their fuel. But a star's lifespan, in general, is dependent on only two properties that it's born with: its mass and its metallicity, which is the amount of elements heavier than hydrogen and helium present within. The oldest stars we've found in the Universe are nearly pristine, where almost 100% of what makes them up is the hydrogen and helium left over from the Big Bang. They come in at over 13 billion years old, with the oldest at 14.5 billion. And this is a big problem, because the Universe itself is only 13.8 billion years old. 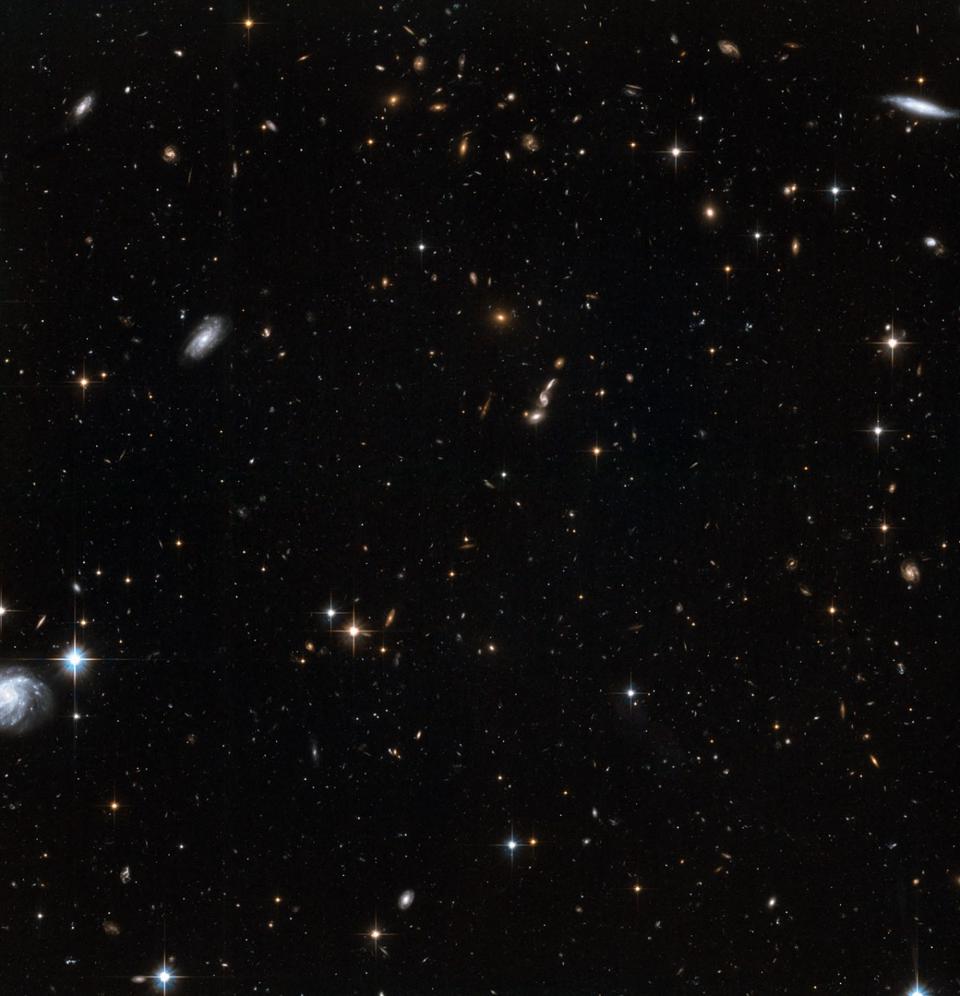 In the Andromeda galaxy, the oldest individual stars are found in the galaxy's halo. However, globular clusters and random field stars may prove to contain the oldest stars of all in the entire Universe.​
You can't very well have a star that's older than the Universe itself; that would imply that the star existed before the Big Bang ever happened! Yet the Big Bang was the origin of the Universe as-we-know-it, where all the matter, energy, neutrinos, photons, antimatter, dark matter and even dark energy originated. Everything contained in our observable Universe came from that event, and everything we perceive today can be traced back to that origin in time. So the simplest explanation, that there are stars predating the Universe, must be ruled out.

It's also possible that we've got the age of the Universe wrong! The way we arrive at that figure is from precision measurements of the Universe on the largest scales. By looking at a whole slew of features, including:

* The density and temperature imperfections in the cosmic microwave background, left over from the Big Bang,
* The clustering of stars and galaxies at present and going back billions of light years,
* The Hubble expansion rate of the fabric of the Universe,
* The history of star formation and galactic evolution,

and many other sources, we've arrived at a very consistent picture of the Universe. It's made up of 68% dark energy, 27% dark matter, 4.9% normal matter, about 0.1% neutrinos and 0.01% radiation, and is right around 13.8 billion years old. The uncertainty on the age figure is less than 100 million years, so even though it might be plausible that the Universe is slightly older-or-younger, it's extraordinarily improbable to get up to 14.5 billion years.

The first supermoon of 2018 will occur on the evening of New Year's Day into the night of Jan. 2. A supermoon occurs when a full moon is at its closet orbital point to Earth, appearing up to 30 percent brighter and up to 14 percent larger than when the moon is at its furthest point in its orbit. Another supermoon will follow on Jan 31, passing by Earth about 26,500 kilometers (16,466 miles) closer than usual. Those two supermoons are part of a trilogy of supermoons that began on Dec. 3. Forecasters say it is rare to have two supermoons back to back, let alone three in a row.

Scientists say the best time to view a supermoon is right after moonrise and before sunrise, when the moon is sitting on the horizon. This makes the moon look even larger compared to other objects appearing against the night sky, such as buildings and trees. The last full moon of January is also known as a blue moon because it is the second full moon to occur during a single month.

A full moon, known as the Blue Moon, is seen next to the Statue of Liberty in New York​
The Jan. 31 moon will also feature a total lunar eclipse, with totality visible from western North America across the Pacific to eastern Asia. The moon will appear to be red, and is nicknamed a blood moon, because it lines up perfectly with the Earth and sun such that the Earth’s shadow totally blocks the sun’s light. The moon loses the brightness normally caused by the reflection of the sun's light and takes on an eerie, reddish glow.

The lunar eclipse will make the Jan. 31 moon a blood moon, a blue moon and a supermoon all at the same time. Unlike a solar eclipse, a lunar eclipse is safe to view with the naked eye, so there is nothing to fear if you are captivated for a long stretch by the night sky.

The internet can be very damaging

Q
Your weight is much less at the equator

Are we are being watched from afar?
2

A moment ago
Burgermeister

New Addition To the Moderation Staff
3 4 5

A moment ago
Race Burley

Why are you paying out, Remington?