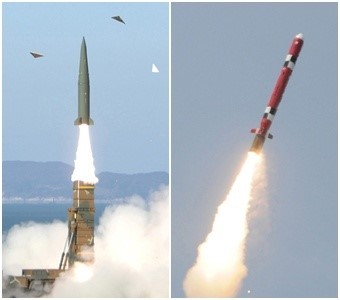 South Korea can now produce missiles that can reach all of North Korea as part of a new deal with Washington that's a response to the North's own growing weapons stockpile. The agreement will allow the South to deploy missiles with a range of 800km, up from the current limit of 300km.

The extension will not only bring the whole of North Korea within reach of Seoul's rockets, but also parts of China and Japan. Chinese and Japanese media voiced unease over the extension claiming that the extension counters a global arms control agreement known as the Missile Technology Control Regime. However, in South Korea's point of view, this is perfectly sound because Seoul needs the ability to deter North Korean provocations. North Korea currently has already deployed more than 1000 scud missiles that can target all of South Korea.

Pyongyang also has ICBMs that can reach even the States. In order to counter these advancements in North Korea, the missile extension was an inevitable decision. From this movement, I hope to see more effective deterrence against North Korea.

Looks like we've started a missile race on the Korean peninsula...

Satellite images suggest North Korean working on missiles, group says
Tue November 13, 2012 - North Korea has carried out at least 2 rocket motor tests since April, website says; It cites commercial satellite imagery that shows activity at a launch site; A failed rocket launch by the North in April scuppered a food aid deal with the U.S.; The academic website sees the possibility of rocket and nuclear tests in 2013

Undeterred by the embarrassment of a failed rocket launch earlier this year, North Korea appears to be pressing ahead with the development of long-range missiles, according to an analysis of satellite images by a U.S. academic website. Drawing on commercial satellite imagery, the website 38 North suggests that the reclusive North Korean regime has carried out at least two tests of large rocket motors at the Sohae Satellite Launch Station on the country's west coast since April. That's the same site from which the nuclear-armed North launched a long-range rocket on April 13 that broke apart shortly after takeoff. Pyongyang said the rocket was supposed to put a satellite in orbit, but the launch was seen by many other countries as cover for a ballistic missile test.

The most recent test of a large rocket motor at Sohae took place in mid-September, according to the analysis posted Monday by 38 North, which is run by the School of Advanced International Studies at Johns Hopkins University. "These tests, critical for the development of new rockets, appear to have been of liquid-fueled, first stage engines" for the type of satellite launch vehicle that failed in April or a new long-range missile that was on show at a parade in Pyongyang this year, 38 North said. Another big rocket launch would further sour North Korea's relations with the United States and South Korea. The failed launch in April scuppered a deal for Washington to provide thousands of tons of food aid to the North's malnourished population.

It also drew condemnation from the U.N. Security Council, which repeated demands for Pyongyang not to carry out similar tests in the future. The botched launch followed previous attempts in 2006 and 2009. The difference this year was North Korea's decision to invite members of the international news media inside the country during the launch period, allowing them to visit the Sohae station ahead of the launch. North Korean state-run media also reported the rocket's failure to put a satellite in orbit, something they hadn't done for the two previous launches. But the setback hasn't stopped Pyongyang from vaunting its alleged military capabilities. Last month, it said its missiles could reach the U.S. mainland, a claim questioned by some analysts.

The unsuccessful satellite launches in 2006 and 2009 were both followed weeks or months later by nuclear tests. That hasn't happened so far this time, but 38 North warned Monday that it remains a possibility. "In the aftermath of the U.S. and South Korean presidential elections, Pyongyang may embark on a new round of activities in the first half of 2013, including rocket and nuclear tests that will contribute to further development of its nuclear deterrent," the website said. President Barack Obama was reelected this month in the United States, and the South Korean presidential election takes place next month. South Korean officials have said they believe the North is ready to carry out a nuclear test whenever leaders in Pyongyang make "a political decision" to go ahead with it.

South Korean officials seized the shipment of 445 graphite cylinders, which had been declared as lead piping, from a Chinese vessel called the Xin Yan Tai, U.N. Security Council diplomats told Reuters on condition of anonymity. South Korean authorities stopped the ship at the South Korean port of Busan, the envoys said, adding that the cylinders were intended for a Syrian company called Electric Parts. South Korean officials briefed the Security Council's North Korea sanctions committee about the seizure on October 24, the envoys said, and China had offered to help investigate the circumstances surrounding the incident. "It appears the cylinders were intended for Syria's missile program," a diplomat said. "China assured us they will investigate what looks like a violation of U.N. sanctions."

Another diplomat said: "It's possible that the crew of the Chinese ship had no idea what this shipment really was. It's good that China's expressed a willingness to investigate." Chinese Foreign Ministry spokesman Hong Lei said that China strictly followed U.N. resolutions and its own non-proliferation export controls. "China will handle behavior that violates relevant U.N. Security Council resolutions and China's laws and regulations according to the law," he told reporters in Beijing. Diplomats said the graphite cylinders appeared to be consistent with material usable in a ballistic missile program and that South Korea would be jointly investigating the case with China.

The shipment to Syria was arranged by a North Korean trading company, diplomats said. One diplomat said the Syrian company that was to have received the cylinders may be a subsidiary of the North Korean trading firm. North Korea is barred from importing or exporting nuclear and missile technology under U.N. Security Council sanctions imposed on Pyongyang because of its nuclear tests in 2006 and 2009. There are U.S. and European Union sanctions on Syria, but no U.N. arms embargo against the government of Syrian President Bashar al-Assad, who has led a 20-month military campaign against an increasingly militarized opposition.

Russia and Iran have been Assad's main arms suppliers. Earlier this year, the Security Council's Panel of Experts on North Korea, a group of independent experts that monitors compliance with the U.N. sanctions regime, said it was investigating reports of possible weapons-related deals between Pyongyang and Syria as well as Myanmar. "The DPRK (North Korea) continues actively to defy the measures in the (U.N. sanctions) resolutions," the panel said in May.

A Critical Look At The U.S. Navy's LCS Program

Can the F-35 shoot down a North Korean Nuclear Missile

White replacement theory. Do you believe?
2 3

Had enough of this news board.

Trump is a Shameless, Anti Gay Bigot and this Crusade by His State Department Proves it
15 16 17