New research show that some popular brands of sunscreen may actually accelerate skin cancer, instead of protecting your skin.

For years, experts have been telling people to apply and reapply sunscreen, especially when facing the sun's harmful rays. According to a new study by the Environmental Working Group released Monday, almost half of the most popular sunscreen contain ingredients that could actually speed up cancer.
Click to expand...

Cancer cell enzymes shown to act as 'good cops'
23 May 2013 - Enzymes released by cancerous cells have a protective function and are not one of the "bad guys", say researchers from the University of East Anglia.

Their study found the MMP-8 enzyme sent a signal to the immune system to attack the tumour. Patients whose breast tumours have more of this enzyme seem to do better. Cancer Research UK said the research provided "very early clues" as to how the enzyme might recruit cells to fight breast cancer. Scientists from UEA worked with clinicians at the Norfolk and Norwich University Hospital to look in detail at the patterns of MMPs in breast tumours from patients. Their study, published in the Journal of Biological Chemistry, reveals that the matrix metalloproteinase-8 enzyme (MMP-8) could be acting as the 'good guy' by alerting the immune system to the location of the tumour. It had been thought that the production of MMPs by breast cancer cells helped to promote cancer growth. 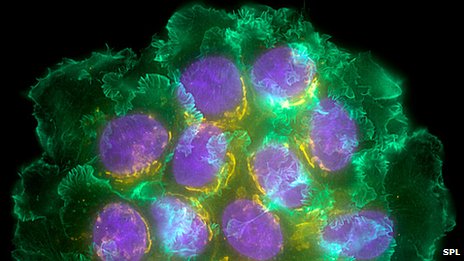 They were thought to clear a path for cancer cells, but now MMP enzymes have been shown to help the immune system attack the tumour

Prof Dylan Edwards, lead researcher from UEA's School of Biological Sciences, said that if breast cancer cells produce MMP-8 it causes them to produce two other inflammatory factors (IL-6 and IL-8) that have previously been shown to promote cancer. "They were once thought to act like 'molecular scissors' to snip away at the scaffolding structures outside cells and clear a path for the cancer cells to invade and spread to other organs. "However, breast tumour cells that over-produce MMP-8 don't survive long-term - the enzyme stops them growing," he said. "We now think that in tumours, MMP-8 acts as a sort of 'find me' signal to the immune system, which then becomes activated to attack the tumour, which may help to explain its protective function." Drugs used to treat cancer in the 1990s, which blocked these enzymes, failed in the clinic, he said, and this new research may explain why.

It is still not known exactly how MMP-8 causes IL-6 and IL-8 to be activated. Finding this out will be an important step forward which will help direct further research. Dr Emma Smith, senior science information officer at Cancer Research UK, said: "This study provides very early clues as to how the MMP-8 protein might actually play the role of a 'good cop' and recruit immune cells to fight breast cancer. "And, rather than seeing the MMP-8 protein as a 'bad cop' in breast cancer, recent research has shown that levels of this protein are raised in women who do relatively well. "Yet, until now, we haven't known why this should be the case. "But these are early findings from cells grown in a lab, and more research is needed to see if the molecules found by the scientists alert immune cells to cancers in women."

It will collate all the available data on each of the 350,000 new tumours detected in the country each year. The aim is to use the register to help usher in an era of "personalised medicine" that will see treatments matched to the exact type of cancer a patient has. Experts said it was "great news". The old definitions of cancer - breast, prostate, lung - are crumbling. Cancer starts with a mutation that turns a normal cell into one that divides uncontrollably and becomes a tumour. However, huge numbers of mutations can result in cancer and different mutations need different treatments.

Research into the genetics of breast cancer means it is now thought of as at least 10 completely separate diseases, each with a different life expectancy and needing a different treatment. The national register will use data from patients at every acute NHS trust as well 11 million historical records. It will eventually track how each sub-type of cancer responds to treatment, which will inform treatment for future patients.

Jem Rashbass, national director of disease registration at Public Health England, said: "Cancer-registry modernisation in England is about to deliver the most comprehensive, detailed and rich clinical dataset on cancer patients anywhere in the world." He told the BBC: "This will fundamentally change the way we diagnose and treat cancer. "In five years we'll be sequencing cancers and using therapies targeted to it." The service will also exchange information with Wales, Scotland and Northern Ireland, which have their own registers.

The Department of Health has already committed £100m to sequence the entire genetic code of 100,000 patients with cancer and rare diseases in order to accelerate progress in personalised medicine. Emma Greenwood, Cancer Research UK's head of policy development, said: "It's great news that this national database has been set up. "It means we have all the UK's cancer information in one place, making us well equipped to provide the highest quality care for every cancer patient. "It'll be easier and quicker to further cancer research, and will speed up work to deliver personalised cancer medicine to patients in the future."

New research show that some popular brands of sunscreen may actually accelerate skin cancer, instead of protecting your skin.

For years, experts have been telling people to apply and reapply sunscreen, especially when facing the sun's harmful rays. According to a new study by the Environmental Working Group released Monday, almost half of the most popular sunscreen contain ingredients that could actually speed up cancer.
Click to expand...

Men! Do we understand 21st century feminism? Does it matter?

Doesn’t it bother republicans Trump isn’t even talking about what he’ll do in his second term?
9 10 11

This shouldnt be allowed in school