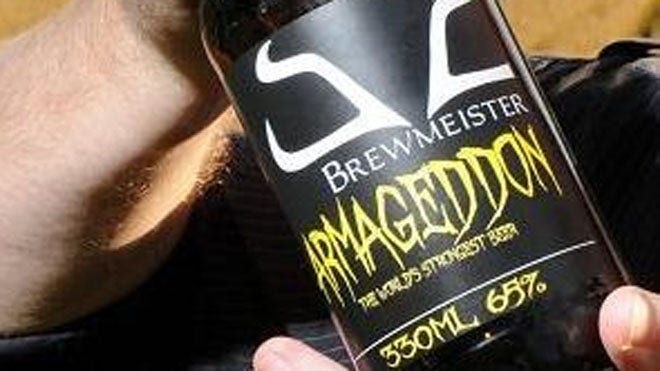 A Scottish brewery claims to have produced the world's strongest beer, Brewmeister's Armageddon, with an alcohol by volume (ABV) of a whopping 65 percent.

The dizzying mix made by the Brewmeister Brewery is brewed with ingredients that include crystal malt, wheat, flaked oats and 100 percent Scottish spring water. The beer then undergoes a process called freeze fermenting, which is done by drastically lowering the temperature and repeatedly removing the first part to freeze, leaving behind only the richest alcohol content.

To help put this into perspective, beers consumed in the U.S. average between 4 to 10 percent ABV, depending on the brand.

When asked about its potency, Brewmeister's co-founder, Lewis Shand, told STV that the beer, which has a "viscous quality to it," delivers quite a punch. "Delivers a supersonic-charged explosion and conveys the taster to Drunksville" is probably more appropriate," said Shand. "In some respects, it is closer to a liqueur than a beer, but it is classified as a beer and we are pleased with it."

Brewmeister brewers are cautioning that the beer should be sipped and served in the brandy-sized doses.

Brewers have been trying to outdo each other to create an ever-increasingly powerful beer. First, Scotland's Brewdog produced 'Tactical Nuclear Penguin' at 32 percent. That was topped by German-based Schorsbrau, which released Schorschbock at 40 percent, only for Brewdog to retaliate with 'Sink the Bismarck' at 41 percent. Brewdog then made The End of History, a blond Belgian ale at an astonishing 55 percent packaged in a nifty case made from stuffed animals, including stoats and squirrels.
Click to expand...

Scottish brewer unveils the world&#39;s strongest beer | Fox News
You must log in or register to reply here.

What was the best in-flight meal to you?

The Truth About McDonald's Burgers That Don't Rot

Would you be better off under Socialism, if so how?
3 4 5

The reason Conservatives lie so much
7 8 9