I thought this was a funny story... We all scream when ice cream looks like this... 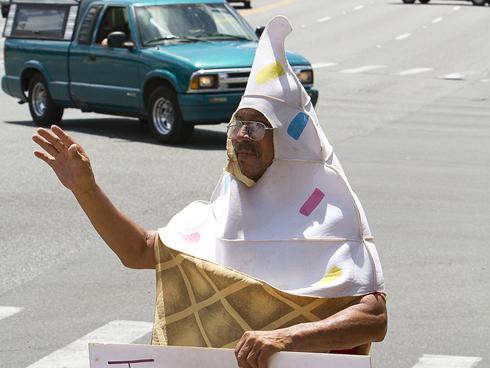 Man in an ice cream costume mistaken for KKK protester

The owners of an ice cream shop in Ocala, Fla., thought they could lure customers by hiring someone to stand outside dressed in an ice cream cone costume.


Daniel Aviles waves to motorists from The Ice Cream Family Corner and Sandwiches in Ocala, Fla. The store stopped the promotion after some customers thought Aviles looked like a KKK protester.CAPTIONBy Doug Engle, Star-Banner, via APThe outfit, a cone-like body topped by a pointed white hood, was doing just the opposite -- driving people away, WTSP reports.

That's because a lot of passersby thought the actor was wearing a Ku Klux Klan outfit.
Click to expand...

too sad to really be funny......why wasnt he mistaken for a conehead from snl...now that i could see
"A lie ain't a side of a story. It's just a lie." snoop the wire

"Links prove nothing retard" said by trump dingleberry miketx
You must log in or register to reply here.

Arabic Writing Was Penned by a Christian
6 7 8