Roberts may favor the Chevron doctrine in the ACA subsidy case

Between Kagan and Roberts, the admin may have fingers crossed. 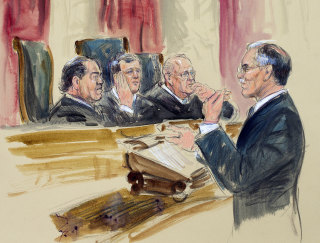 Chief Justice Roberts, usually among the most active questioners on the court, scarcely said a word throughout the oral arguments on Wednesday in King v. Burwell.CREDITDRAWING BY DANA VERKOUTEREN VIA AP

The Supreme Court oral argument on Wednesday in King v. Burwell featured thousands of words, dozens of provocative questions, two engaged and skillful lawyers—and one very striking silence. Chief Justice John Roberts, usually among the most active questioners on the court, scarcely said a word throughout the highly anticipated clash. The justices besieged Solicitor General Donald Verrilli and Michael Carvin, the lawyer for the plaintiffs, who are challenging a central provision of Obamacare, with so many questions that Roberts gave the pair ten extra minutes a side. The chief himself didn’t take up any of that time until practically the last moment.

Roberts’s one question may turn out to be extremely important. The issue in the case is whether the Obama Administration, in implementing the Affordable Care Act, violated the terms of that law. The plaintiffs assert that the A.C.A. only authorizes subsidies for individuals who buy health insurance on the fourteen state-run exchanges, or marketplaces. Under their reading of the law, the eight million or so people in the other thirty-six states who currently buy their insurance from the federal marketplace should be denied their subsidies. Most of the justices’ questions dealt with the issue of how to read the law correctly, but Roberts, in his single substantive question, took a different tack.


Anthony Kennedy had asked about “Chevron deference,” a doctrine of law that describes how much leeway the executive branch should have in interpreting laws. Verrilli, not surprisingly, said that the Chevron doctrine gave the Obama Administration more than adequate permission to read the law to allow subsidies on the federal exchange. “If you’re right about Chevron,” Roberts said, at long last, “that would indicate that a subsequent Administration could change that interpretation?” Perhaps it could, Verrilli conceded.

The question suggests a route out of the case for Roberts—and the potential for a victory for the Obama Administration.
You must log in or register to reply here.

Trumpery was rejected, but continues to ravage the GOP

I Hear Texas Will Be Turning Blue Soon
6 7 8