Revival of the cavalry

Can't you get a single thing right? Someone is starting to appear as mentally retarded, and his user name is rupol2000. Or should I say her username?
Click to expand...

And the majority of those were through logistics accidents and not enemy fire.

Mushroom said:
Everything he just said to be honest made absolutely no sense. Especially as neither side used untrained "rabble". Both the Coalition Forces as well as the French forces were highly trained armies. If the French forces were indeed "rabble", there is no way they would have held out for more than a dozen years against a vastly numerical force.

Yet another example of RuPaul talking out his arse.

And he does not even seem to understand the various terms, mostly trying to use different terms that do not even mean what he thinks they do.

All "muskets" are "firearms", And in the Napoleonic Wars, almost all firearms were rifles other than Napoleon's forces. He simply preferred smoothbore muskets because of the faster reloading times. Which actually worked in his favor during a great many battles, as he used fire and maneuver along with rapid firing far more than most European forces generally did.

And "lucky to fire one round per minute" is an outright lie, as all forces were able to fire at an average of three rounds per minute. For reload times of a minute or longer, you would have to go back over 300 years earlier to the much more cumbersome and primitive matchlock Arquebus of the 15th century.

Hell, the Austrians even had units armed with repeating rifles that could fire up to 30 rounds before they had to be recharged.
Click to expand...

You are ignorant. In the Napoleonic war almost no units used rifles. The few that did were using muzzle loaders with the same round balls the untitled muskets used. To fit into the rifling, the balls had patches wrapped around them and had to be forced and sometimes even hammered down the bore. The ACW era Minie Ball changed that. It was a conical shaped undersized round that fit freely down the bore and when fired, the cavity in the base spread the base of the round and engaged the rifling. It was as fast, or faster to load than a contemporary smooth bore musket.

Your repeating rifle was the Girardoni air rifle. It could fire twenty rounds on one air flask, the rifleman carried three air flasks and a hundred balls. The maximum range on a full flask was 120 Yards and fell with every shot. The rifle was a failure in service due to its extreme fragility and only 1300 were ever built.

You really need to do some research before making your outrageous and inaccurate posts.
Last edited: Dec 1, 2021
OP
R

1srelluc said:
OK so what are you going to use for harness makers and all the other miscellaneous articles produced to keep cavalry in the field? We are not talking about the small scale tack makers of today but harness/tack produced on a industrial scale.

Smaller scale pack animals for specialized units I can see but traditional Cavalry is a non-starter.
Click to expand...

I did not understand what the problem in setting up the production of equipment for the cavalry. The production is simply organized according to the military order and begins to develop and manufacture.

Location
Near Baghdad By The Bay, California

AZrailwhale said:
You are ignorant. In the Napoleonic war almost no units used rifles. The few that did were using muzzle loaders with the same round balls the untitled muskets used.
Click to expand...

Oh my dear lord. Are you even aware of what a rifle is?

A rifle is a firearm that uses a rifled barrel. Rifling put in place to cause a spin on the projectile, increasing range and accuracy.

It has not a damned thing to do with it being muzzle loaded or not. And neither does the shape of the projectile matter.

And yes, most Coalition forces did indeed use rifles. In fact, the French forces were the only side in the Napoleonic Wars that did not use rifles.

First, the British. The main firearm with the Royal Army was the Baker Rifle. First issued to all forces in 1801, it was still their standard weapon into the 1830's. A .625 caliber ball, this is unquestionably a rifle. Nor granted, the standard firearm for Colonial Forces was indeed the "Land Pattern Musket", a smoothbore commonly known as the "Brown Bess", but the forces deployed against Napoleon were most commonly issued the Baker.

I already discussed the Girardoni, a repeating rifle that was used by the Austrians and fired a .46 caliber ball. And yes, I know it was an air rifle. And if you think it was "fragile", try reading the Lewis and Clark journals. But while it had a 20 ball "clip", a shooter could fire on average 28-30 balls from a single flask. And the Austrians loved it because firing them did not obscure the battlefield with smoke, and they could be fired in all weather, and each rifle was also issued with a hand pump. So your stating that they issued "three flasks" is largely meaningless, as like with a musketeer they would have a "hip flask" to use on the battlefield. But also a larger one that would be used to refill it in their pack.

Now as "Germany" at that time was a fractured region of principalities, they did not actually have a unified military. But one of the most common ones were the "Jäger Rifles" units. And yes, as the name clearly says, they used rifles.

Like before, you seem to be confused. Rifles can be muzzle loaders, and can even fire ball projectiles. I used to hunt deer with a .50 caliber Kentucky Long Rifle I made myself. I fired round balls, and it was unquestionable a rifle.

Funny how you simply scream over and over I am "ignorant". But tell me, how many black powder weapons have you fired? For me, it is dozens and I have built 2 of my own. It was actually quite a passion of mine about 30 years ago, but I got out of it once I left North Carolina and sold them all to others. It was not exactly like I was going to be doing much deer hunting once I got transferred to the Bat area.

Now no need to tell me what a patch is, I very well know. But remember, you are trying to mix and match two very different eras of firearms here. And you just can not do that and expect to be taken seriously. You keep jumping to the Minié ball, a mid-19th century era creation. And apparently have some bad misconceptions about earlier era rifles. Such as they had to be "hammered in". That was simply not the case in standard operation, other than the simple fact that standardization was still often times questionable in that era. Most infantry typically made their own bullets, which were actually from molds they customized to fit their own guns. But in battle, I could see one having that issue if they had to replace their gun with one from another, or ran out of rounds and had to scavenge them from others.

But that had not a damned thing to do with rifle or non-rifle, that is simply how it was in that era when "standards" were absolutely nothing like they are today, and almost everything was hand made. And all muzzleloaders were "rammed". But ultimately, more than even the Minié ball it was the percussion cap that helped the widespread adoption of rifles. The US was already issuing rifles to their troops after the War of 1812, which was even breech loaded. Originally as a flintlock but quickly converted to percussion cap.

Mushroom said:
Oh my dear lord. Are you even aware of what a rifle is?

A rifle is a firearm that uses a rifled barrel. Rifling put in place to cause a spin on the projectile, increasing range and accuracy.

It has not a damned thing to do with it being muzzle loaded or not. And neither does the shape of the projectile matter.

And yes, most Coalition forces did indeed use rifles. In fact, the French forces were the only side in the Napoleonic Wars that did not use rifles.
Click to expand...

This is fucking critical if you don't see the difference cut a screw in your ass and shoot shit.

First of all, this influence the rate of fire, and it defines the formation of a linear front, how many rows in the front. Then it influenced accuracy and fire power, and influenced a huge number of things. In mass armies, these nuances always play a colossal role because they make up the entire combat power of the army.

The Old Guard U.S. Army at Arlington Ft. Myer maintains a stable of horses used in Military funerals. A couple of years ago I happened to visit the facility and talked to some of the Soldiers who cared for the animals and participated in the remarkable ceremony involved in the burial of an honored member of the Military. The Army still cares for horses.

Location
Near Baghdad By The Bay, California

whitehall said:
The Old Guard U.S. Army at Arlington Ft. Myer maintains a stable of horses used in Military funerals. A couple of years ago I happened to visit the facility and talked to some of the Soldiers who cared for the animals and participated in the remarkable ceremony involved in the burial of an honored member of the Military. The Army still cares for horses.
Click to expand...

At one time, most large military bases maintained stables as part of their MWR program. But most of these were closed in the early 1990's.

I used to use the one frequently with my family on Camp Lejeune. It was primarily manned by volunteers, and the waiting list to work there was long. It was something like $5-10 per person, because even an E-3 with 2 kids could easily afford it.

Today, almost all are gone. The last I know of in the Marines is at Camp Pendleton, and it is $50 now.
OP
R

Mushroom said:
At one time, most large military bases maintained stables as part of their MWR program. But most of these were closed in the early 1990's.
Click to expand...

again trail of the leftish, in 93 came Clinton

Tanks, which appeared as a tool for breaking through the front, could not replace cavalry. Although their armor and firepower allowed them to break through the enemy's defenses, their low speed and maneuverability did not allow them to go into the rear of the enemy and strike at his communications. For this reason, in the battles of 1918, the cavalry had to build on the success achieved by the tanks. Although the cavalry remained a means of mobile warfare, the operation still needed to be transferred to this mobile war, breaking through the enemy's front. 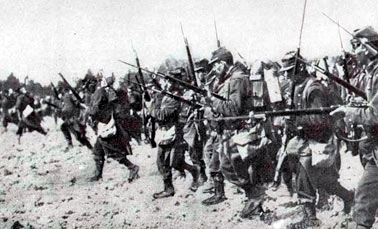 Thus, the cavalry remains more than relevant, because neither the armored vehicles nor the infantry can provide such speed and flexibility of maneuver in the rear.

Poland to double the size of its military, makes it ready for Asiatic Muscovite horde attack

They Dread Admitting They've Been Suckers.
2

Based on worldwide data….are whites ‘superior’?
2 3