The New York Police Department already has spent $1.9 million, mostly in overtime pay, to patrol the area near Zuccotti Park, where hundreds of protesters have camped out for several weeks. Though cold weather is on the way in, protesters don't plan on leaving anytime soon. They're prepared to stay put for the long haul.

"The bottom line is that people want to express themselves, and as long as they obey the laws, we allow them to," Bloomberg told reporters Monday when asked about the protesters' staying power. "If they break the laws, then we're going to do what we're supposed to do  enforce the laws."

Last week, Bloomberg ordered all agencies to prepare to cut expenses by a total of $2 billion during the next 18 months. Police Commissioner Raymond Kelly said the budget cuts may cause the cancellation of a new class of police officers entering the academy in January.

Police officials would not comment Monday on whether the Occupy Wall Street protest would have any bearing on how the budget cuts would play out. A spokesman for Bloomberg declined to comment on any financial issues.
Click to expand...

Yes there is a tremendous cost to the taxpayers of New York City to accommodate the Occupiers of Wall Street. Not only additional police (overtime pay) on the scene but what will be the cost of all this trash removal? 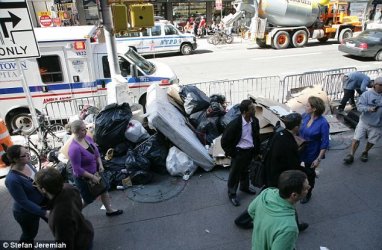 I think some people need to ride in from bk, queens, and come down from Harlem and get these douches outta there and "take the city back"...
OP

CT9 said:
Fuck all these corny "take the country back" and whatnot community organizer trash

I think some people need to ride in from bk, queens, and come down from Harlem and get these douches outta there and "take the city back"...
Click to expand...

With NYC having to make 2 BILLION dollars in CUTS over the next year--one would think that Bloomberg would wake up and say enough--to these Occupiers of Wall Street protests. They've been there for 3 weeks--they still aren't organized or have any kind of coherent message--it's time to pick up the drum sets--the guitars--and the TRASH and go HOME.
Last edited: Oct 11, 2011
Partisan politics often results in seeing the truth, knowing the truth, while still defending and promoting the lies.
C

I agree, as i said in the zombie thread, it will be interesting I think how this all ends to say the least... and hopefully that's the most
You must log in or register to reply here.

China & Europe Do Socialist Banking Crisis Interventions: Opposed By GOP, Even In USA

The Republicans Are Down-Playing The Religion Aspect In Their Primaries

Why do some Democrats want to pass new laws against violent crime, intead of enforcing the laws that are already on the books?
2 3

Democrat policies and their war on the police has increased crime in the U.S.
2 3 4

Zone1 The board is supporting black racist
2