A man claiming to be a close pal to President Obama during college made contact with Republican operatives recently, ready to go public with claims that Obama used and sold cocaine in college, RadarOnline.com is reporting exclusively.
The operatives tried to spread the story through the media and the Romney campaign, a source close to the situation told Radar.
At first he wanted to do a book, a source close to the situation told RadarOnline.com about the alleged college pal. But there just wasnt enough time before the election.
The people he is involved with have produced other credible information that is damaging to national Democratic figures in the past few years.
Operatives close to the Romney campaign were contacted and rejected the information, the source told Radar.
They didnt want anything to do with it, the source said. They thought it was not anything they wanted to be associated with or anything their candidate would want to be associated with.

The commiecrats would excuse it as long as he didn't tease anyone. After all youthful indescressions are ok as long as it can't be construde a bullying. Right?
We sleep peacefully in our beds at night because rough men are willing to do violence on our behalf.

Thanks -- and I don't doubt anything he did - the man has no conscience.

However, I'd rather hear more about his current muslim terrorist connections - for those who don't get the gist of Jeremiah Wright. You know, those just now trying to catch up on the terrorist-in-chief. Those.
~~Theme song in hell: "I Did it My Way"~~
P

Maybe he was a entrepreneur after all. Cool.

Hey, is that how he was able to afford to travel abroad during his college years?

Accused Colombian Drug Kingpin Admits to US Cocaine Scheme
November 20, 2014 — For the second time in two months, a Colombian accused of being a drug kingpin and pursued for years by U.S. authorities pleaded guilty to federal charges in a New York courtroom on Thursday.

Daniel Barrera, 47, faces life in prison after pleading guilty in Manhattan federal court to a charge that he conspired to manufacture and import cocaine knowing it would be imported into the United States. He had pleaded guilty in October to conspiring to illegally launder tens of millions of dollars in cocaine trafficking profits in a separate related case in Brooklyn federal court. Barrera, also known as "Loco" (Crazy), was extradited in July 2013 to face those two indictments as well as a third in Miami. 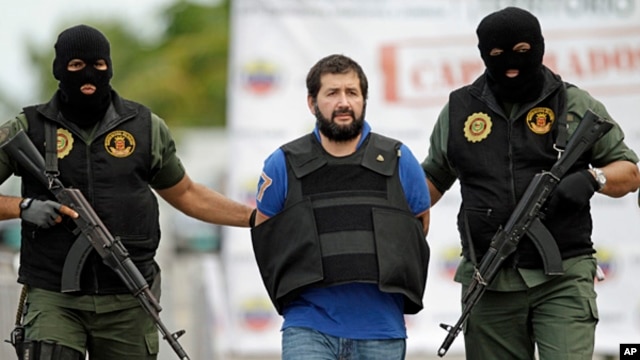 Daniel Barrera , one of Colombia's most wanted drug lords, whose alias is “El Loco” is escorted in a flak jacket by National Guard troopers as he is deported to Colombia from Venezuela

U.S. authorities have accused Barrera of running a cocaine manufacturing and trafficking syndicate since 1998 that processed about 400 tons of the drug annually. Prosecutors say Barrera bought the raw cocaine paste from the leftist rebel group FARC and processed it in laboratories in areas controlled by a now-demobilized paramilitary group, the United Self-Defense Forces of Colombia, or AUC. "A drug kingpin who enriched two terrorist organizations and himself by producing and peddling poison now stands to lose his wealth, his empire, and his liberty," Manhattan U.S. Attorney Preet Bharara said in a statement.

Barrera was arrested in Venezuela in September 2012 with the help of authorities there as well as British and U.S. intelligence agencies. Colombian authorities had been closing in on his organization in the weeks before his arrest, detaining 36 suspected members and seizing five tons of cocaine. Barrera is scheduled to be sentenced Feb. 27. He will then be presented and arraigned in Miami on the third indictment, prosecutors said Thursday.

Why Democrats Must Retain Control of Congress in 2022
2

A moment ago
Quasar44
Q
O
A real conservative speaks