Mexico`s Drug Lords Are In An Arms Race 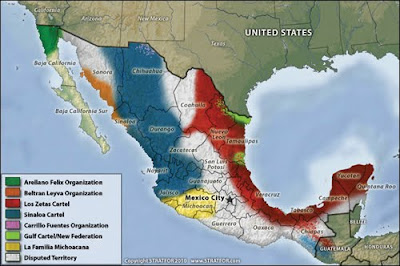 Mexicos Drug Lords Ramp Up Their Arsenals with RPGs -- Time

When a Mexican SWAT team stopped a stolen Cadillac van in the border city of Piedras Negras, it was not a surprise when they were greeted by a tirade of bullets as the criminals blasted and ran. But after they kicked open the trunk, the officers realized they could have been victims of more catastrophic firepower. The gunmen had been in possession of an arsenal of weapons that included three Soviet-made antitank rockets complete with an RPG-7 shoulder-fired launcher. If the criminals had got a rocket off, they could easily have blown the SWAT vehicle to pieces. RPG-7s can also take out helicopters and were used in the Black Hawk Down episode in Somalia in 1993.

Comment: Talk about escalation and changing the dynamics in Mexico`d drug cartel wars.

South of our border and the major media reports nothing of this!
Stories about the fact and fiction of California history @ Saint Junipero Serra's Legacy
Life in the military and other items @ A Soldier's Stories
I voted for President Trump and am proud of it!

Granny says dat's a good idea - with all the drug violence goin' on down there, dey ain't got no unity...

Calderon, who leaves office Dec. 1 after six years as president, said Thursday he wants the country to be known simply as "Mexico" on official documents and currency, the BBC reported. "The name of our country no longer needs to emulate that of other nations," Calderon said in a news conference, referring to the name's similarity to its northern neighbor, the United States of America. "Forgive me for the expression, but Mexico's name is Mexico," he added.

The country took its name in 1824 after winning independence from Spain, modeling it after the United States, which was seen as an example of democracy and liberty.

Critics of Calderon's proposed legislation said the country has bigger problems than a name change, CNN reported. "With so many real problems in this country, I don't think that it matters," Enrique Krauze, a leading historian and political analyst, told The New York Times. "No one ever calls Mexico anything other than Mexico."

US Returns 4,000 Archaeological Relics to Mexico

C
100 MEXICAN candidates murdered ahead of their election! And we wonder why people are fleeing?
2

FBI Shows Up At Trump Rally.....Trump Said It Was A Trap....And It Was

Child Abuse Approved of by the State

H
So with why with 50 years of political experience did France pulls their ambassador? Wow!
9 10 11