The Tea Party has been scrutinized relentlessly by the media

- They are portrayed as racists and extremists
- They are constantly asked rather then about their positions to denounce racism, which has nothing to do with their small government agenda, to divert attention from their small government agenda and put them on the defensive
- Supporters prior positions are scrutinized and an explanation demanded for any position in the past which could possibly be counter to the movement no matter how long ago
- Any term they use which could be twisted and exaggerated to have a possible violent use no matter how obviously it wasn't meant that way is assumed to have been meant that way, while similar terms used against them are fine.
- The media constantly repeat they will hand Democrats elections no matter how badly the Democrat trails in the polls.

OWS was met by the Media with popping Champagne corks.

First of all, the OWS is already represented completely in congress by the Democratic Party. And those of you who still cling to the desperate and ridiculous belief that the media's not flamingly liberal in this country and completely in bed with the Democratic party would deny the sky is blue if it meant electing a Democrat.
Solzhenitsyn perfectly describes Democrats: They lie to us, we know they're lying, they know we know they're lying, they lie anyway

The introduction of this new principle of representative democracy has rendered useless almost everything written before on the structure of government; Thomas Jefferson

Plenty of "End The Fed" types in the OWS protests but that doesn't get much coverage. What gets attention are the people and groups that are trying to hijack it for their own gain. Communists, Anarchists, Unionists et all. Just like the Republican Party tried to hijack the T.E.A. Party.

This is what the OWS is all about: 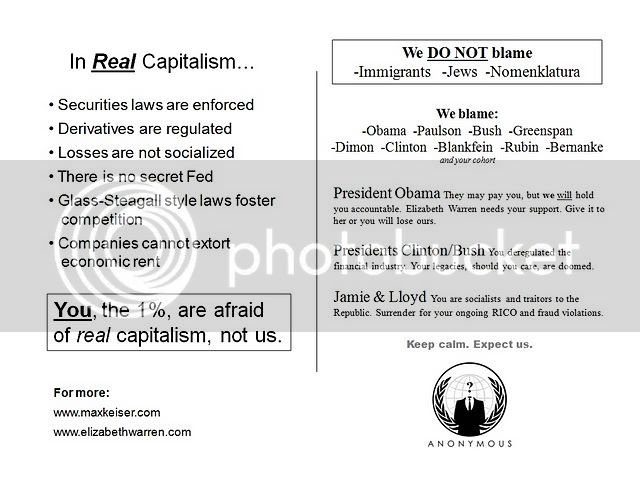 Jamie Dimon and Loyd Blankfein are JP Morgan Chase and Goldman Sachs Chairmen and CEO's (In case you didn't know)
Olive: Dimon a banker who is his own worst enemy - thestar.com
"Democrats haven't been this angry since the Republicans freed their slaves"
- Reddit
You must log in or register to reply here.

Should Obama Send Back His Peace-Prize???

Ann Coulter on the weaponization of everything: how war impacts every facet of our lives, especially the midterms!

A moment ago
Hellbilly

Why again aren't leftists demanding the epstein list of names?
2

Thursday at noon, Justice Beyer steps down officially. We'll have the first ever USSC Justice who does not know what a woman is
3 4 5