"Liberals" and "Conservatives" are both wrong on a Jobs Plan.

The general argument that the President should try to do something effective has merit. However, just as important is understanding what, exactly, is likely to be effective given the existing goals of people and the resistance that will result from policies that contradict their goals. People do not want the government to spend money to create jobs, so while it is "brave and foolish" to continue advocating such, a more flexible approach both by the President and by other concerned parties is more likely to achieve a reduction of unemployment.

The largest battleship ever constructed, the Japanese battleship Yamato, was given as much fuel as the local port commanders could provide instead of just enough for a one-way voyage as ordered, but this did not prevent it from being destroyed in combat or heavy criticism about better uses for that precious fuel under the blockade.

Narayana Kocherlakota, one of the dissenters on the Fed's statement about future interest rate expectations, assumed in his modeling of unemployment that prices and the shape of the demand curve have no effect on unemployment:
Labor Markets and Monetary Policy - The Region - Publications & Papers | The Federal Reserve Bank of Minneapolis

This assumption is at the base of claims that unemployment can fix itself without government intervention if people just agree to work for less.

This would be a reasonable claim to make if markets were "competitive". But no one but Apple is allowed to sell the iPods made by Foxconn, which leads to a demand curve where businesses have no reason to reduce prices when labour costs fall, because reducing prices would not increase revenues. 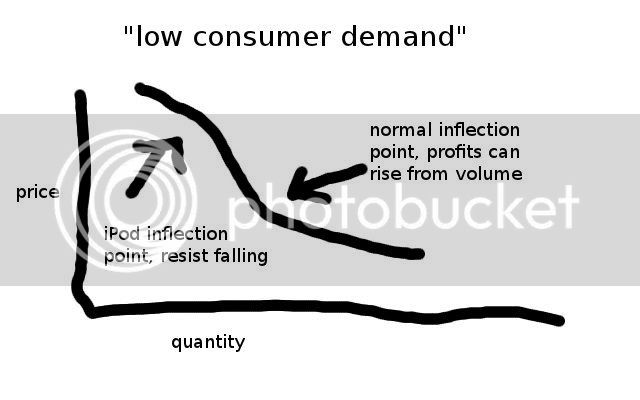 When businesses have no incentive to hire more because of "low consumer demand", the only way to have full employment is for people to work less.
Why economists are wrong - Pastebin.com


Mr Jared Bernstein said,
"House Rs will likely block most of the above ... lets make sure everyone in this country knows exactly whos standing between the 20+ million un- and underemployed Americans, and their jobs, paychecks, and living standards."

Do you really expect the unemployed worker to want the government to spend more, so their neighbor who is employed has to pay higher taxes (or suffer inflation on their savings/fixed income)? How exactly does this cause people to feel any less like a "manipulative leech" as someone I know put it?

The alternative, once again, is for the employed worker to be 'taxed' (where the taxes go to their employer, not the government) only if they refuse to reduce their working hours to allow the unemployed worker a job and an income. One-Step Plan to Eliminating Unemployment - Pastebin.com

There is already a strong undercurrent of opinion among the general public that people need to consume less, not more:
The Consumption Economy Is DyingLet it Die - Michael Mandel - Business - The Atlantic

So "aggregate demand", and the economy are only likely to get worse if people do not agree to conserve work.
R

When businesses have no incentive to hire more because of "low consumer demand", the only way to have full employment is for people to work less.

Democrats have been saying this for decades.

Misaki said:
There is already a strong undercurrent of opinion among the general public that people need to consume less, not more..

So "aggregate demand", and the economy are only likely to get worse if people do not agree to conserve work.
Click to expand...

There's already a strong undercurrent of opinion among the general public that central planning of economies is a dismal failure.

So, take your "aggravate demand", the rest of your charts and graphs, your know-it-all technocrats and bureaucrats, shove 'em where the sun don't shine and let the American people work this out for themselves.

Why is it the governments responsibility to get people jobs? Why on earth do we, as a people, accept this blatantly false concept?

We are an idle and proud people. We need to humble ourselves and get to work. And you know what, sometimes it takes effort to get regular employment. Sometimes the work we do doesn't pay off immediately. But the longer we expect other people to create jobs, the longer we think we can live without doing work, the longer we will be miserable and unemployed.

Is it easy? Heck no. But the longer we keep lying to ourselves instead of putting effort into it, the longer we will fail to see the fruit of our efforts.

Ben Franklin once wrote something to the effect that the burdens placed on us by government can be heavy. But the burdens we place on ourselves through our pride, our idleness, our carelessness, and our foolishness can be far heavier. Let's change the world by changing ourselves.
To suppose that any form of government will secure liberty or happiness without any virtue in the people is a chimerical idea. - James Madison

Is it to soon to speculate? Is Biden out, or in for the distance?

New Low of 26% Approve of Obama on the Economy

Here's President Trump's Monumental Accomplishments In His Just One Term----Can Biden Measure Up To This?
8 9 10

Republicans Are Offering Americans Nothing, Literally Nothing
4 5 6

The Unoriginality of "Trump Derangement Syndrome":