Lee departs for Uzbekistan after trip to Mongolia

South Korean President Lee Myung-bak left Mongolia for Uzbekistan on Tuesday for summit talks and a series of economic deals, including a US$4 billion contract to develop a gas field and build a related plant.

The contract to develop the Surgil gas field near the Aral Sea and build a gas and chemicals plant will be the largest-ever cooperation project between South Korea and Uzbekistan since they established diplomatic relations in 1992. 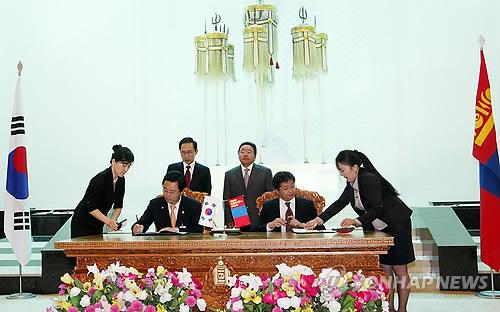 Mongolia is believed to have the world's 10th largest deposits of energy and resources. During a joint press conference with President Tsakhia Elbegdorj on Monday, Lee called Mongolia a "country of limitless potential."

Lee and Elbegdorj also agreed to elevate relations between the two countries to a "comprehensive partnership" in a symbolic commitment to bolster ties in all areas, and adopted a mid-term action plan providing guidelines for bilateral cooperation.

Under the slogan, they agreed to hold summit and other high-level talks more often and have their foreign ministers meet every year to discuss bilateral relations and other issues of mutual interest in regional cooperation. They also agreed to expand defense cooperation.

Other economic agreements included expanding South Korea's investment in Mongolia's infrastructure and construction sectors, including a project to build 100,000 apartment units in Mongolia, and expanding air routes and simplifying the visa process between the two countries.

Mongolia was the first leg of Lee's three-nation visit to Central Asia. After Uzbekistan, Lee will visit Kazakhstan on the last leg of the six-day tour.
You must log in or register to reply here.

Georgia got out of hand

Who Owns the Arctic?

Sunday at 7:06 AM
Tommy Tainant

Man uses his concealed gun to save life of woman entering abortion clinic...likely there to kill her baby. Leftists cry.
2 3

Round up the Dissenters

The GOP Has a Problem: My Generation Isn't Conservative
14 15 16