Behold, folks, Fatso the Troll awoke on his Porta-Potty right now and felt that he had to chime in once again. How wonderful to have my own personal stalker on the Internet. Good thing he can't get off the Port=Potty to stalk me in person or I would have to turn him in to the authorities. I wonder if the cots in the jail cell would hold his weight.
IRAQI AND AMERICAN MONKS SALVAGE CHRISTIAN HISTORY IN IRAQ 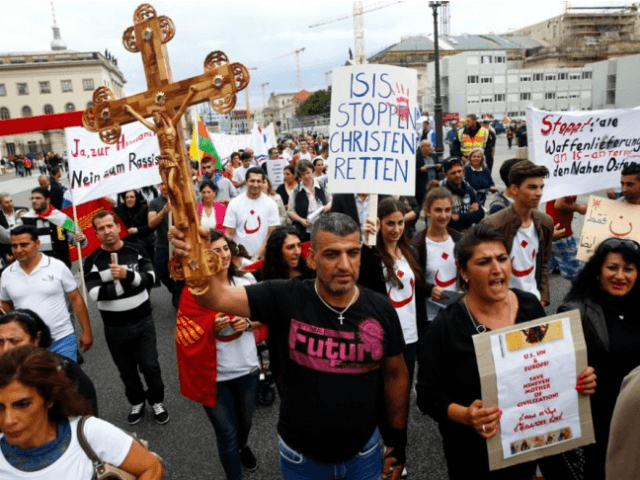 
With the rise of the Islamic State, the rich, 2,000-year history of Christianity in Iraq–historically home to a large Christian population–has been significantly threatened. Many historic Christian monuments have been targeted for destruction, leaving the responsibility to preserve the nation’s Christian history to the monks remaining there.
NPR’s Alice Fordham traveled to Erbil, Iraq–a city under Kurdish control–which is 57 miles east of Mosul. She met two monks, Iraqi Father Najeeb Michaeel and Texan Father Columba Stewart, who are determined to rescue Christian artifacts. Father Michaeel’s congregation fled to Erbil after the Islamic State conquered their town Qaraqosh. Inside a safe house, the two men stock any relic they can find, including huge piles of books and manuscripts.

“This is a New Testament – altogether Saint Mark, Matthew and Luke and Jean here,” he described one book to Fordham. “And as you see, in many colors also here.”

Father Michaeel is a Dominican monk, an order present in Mosul since 1750. The monks brought many manuscripts to the historic town in the early 1800s, which resulted in a huge library. During his time in Mosul, father Michaeel photographed and digitalized as many as he could with help from Father Stewart’s Hill Museum and Manuscript Library in Minnesota. But an impending attack by the Islamic State halted his efforts. He packed up a truck full of the collections to save them.

“I prepare everything, and take a very big truck and put all this collection,” he explained. “At 5 a.m., I came with a truck. We passed the three checkpoints without any problem. I think Virgin Mary have her hand to protect us.”

Oh my.......
"The trouble with our Liberal friends is not that they are ignorant ~ it's just that they know so much that isn't so!" - Ronald Reagan

The only people extant today who know Iraq----are Christians and Jews------actually there were also Zoroastrians there when the stink of Arabia invaded and TOOK OVER I was glad
when the issue of YAZIDIS came up-----glad because they are
clearly the SURIVIVING Zoroastrians------horrified that they
are being targeted by the meccaist dogs. The current events in Iraq today are an attack on the HERITAGE OF MANKIND

Do tell .....
"The trouble with our Liberal friends is not that they are ignorant ~ it's just that they know so much that isn't so!" - Ronald Reagan

In Iraq's Biblical lands, scattered Christians ask 'should I stay or go?'

Celebration of our Christian history
4 5 6

The Road to Auschwitz Ran Through American Genocide. Part I
2

Black History Month: Why not teach about Arab-Muslim slavers?
2

S
What I think of transgenderism
2 3

Trump Sanctions On Russia and China
2

Texas redistricting - You won't believe it
2 3 4