A situation can hardly be more absurd. The militants that receive Syrian and Russian bombs get respawned by Turkey and get bombed again and respawned. There has been no invasion most likely due to Turkey´s influence.
Turkeys ongoing presence in Idllib continues despite the fact that their "rebels" (Zinki child beheaders ect) are beaten and Al-Qaeda took over almost completely. Yet they stay in their observation posts although whatever is officially considered terrorist is the only entity left.

But this could change soon as a possible SAA invasion has become more likely. The SDF has denied they plan operations against the SAA in eastern Syria so the SAA must be on high alert in this region because the ISIS thugs that are now SDF are planning to do exactly this, should the army launch the operation in Idlib. The ISIS thugs forget that the endless SAA frontiers are no longer existent and that the SAA can now deal with several threats while conducting a large offensive.

Do not confuse the Rojava Kurds with the ISIS/SDF thugs.
OP

Russia: Time for Idlib is running out.

"Safronkov said during Security Council session on Wednesday that militant groups such as Hayat Tahrir al-Sham (HTS), formerly Al-Qaeda’s Nusra Front—remained active in Syria’s northwestern province of Idlib despite Turkish assurances that they would be removed.
“The situation in Idlib remains volatile. Militants from Hayat Tahrir al-Sham do not cease to attack the governmental forces. They strike indiscriminately, including against civil infrastructure. Peaceful people die,” Safronkov said, blaming the West-backed Syrian civil rescue group—known as the White Helmets—for plotting “new provocations” via chemical attacks to draw international action against the Syrian government.

“We see what is happening,” he added. “We cannot say for how long this status quo in Idlib can last. It is not viable at all, on the contrary: it is dangerous for Syria and the region.”"
Russian warns that Time is running out for Syria’s Idlib | موقع مراسلون
Last edited: Apr 26, 2019
OP

Turkish military hit by shells. The terrorist supporting army was hit by Syrian shells, thee soldiers were injured and flown out.

The Caliph and his terrorists suffered a major defeat.

"The Turkish Army and their allied rebel forces launched, Saturday, a new offensive in the northern countryside of the Aleppo Governorate.

Targeting two towns controlled by the Kurdish-led People’s Protection Units (YPG) and Afrin Liberation Forces, the Turkish Army and Free Syrian Army stormed the area in an effort to overpower the enemy.

The Turkish Army and FSA troops were able to capture the towns of Al-Malkiyah and Maraanaz after the YPG and ALF temporarily retreated south towards the key town of Tal Rifa’at.

However, their success would be short lived, as the YPG and ALF were able to force the Turkish military and FSA troops to retreat back towards the city of Azaz in the northern countryside of Aleppo.

Following their retreat, the Turkish Armed Forces and FSA began heavily shelling the area in a bid to prevent the ALF and YPG from reentering the towns.

Despite the intensity of the Turkish bombardment, the ALF and YPG were able to regain control of the two towns by nightfall on Saturday.

The Turkish Armed Forces are still pounding the area with rockets and artillery shells, with some of the projectiles going as far south as the Syrian Arab Army (SAA) held territories in northern Aleppo."

Everything you need to know about the upcoming Idlib offensive

US soldier may have been killed by Turkish Army attack: monitor
Last edited: May 5, 2019
OP

Here are more news. They are all unconfirmed but its nothing unbelievable.

There are heavy clashes taking place.

The terrorist casualties are 250+

The UAE has started distributing food in Damascus.

There must be many rebels.
OP

Al-Qaeda´s Erdogan and ISIL´s Trump firmly stand behind their terrorists.

so let them 'rebel' themselves into oblivion

so let them 'rebel' themselves into oblivion

It will happen. But interested people must know that Idlib contains may "rebels" from other former frontlines that were transported to Idlib by the government in surrender agreements.
OP

The terrorist offensives are depleted and the army advances.

The Sayf al-Dawla neighborhood in Aleppo: 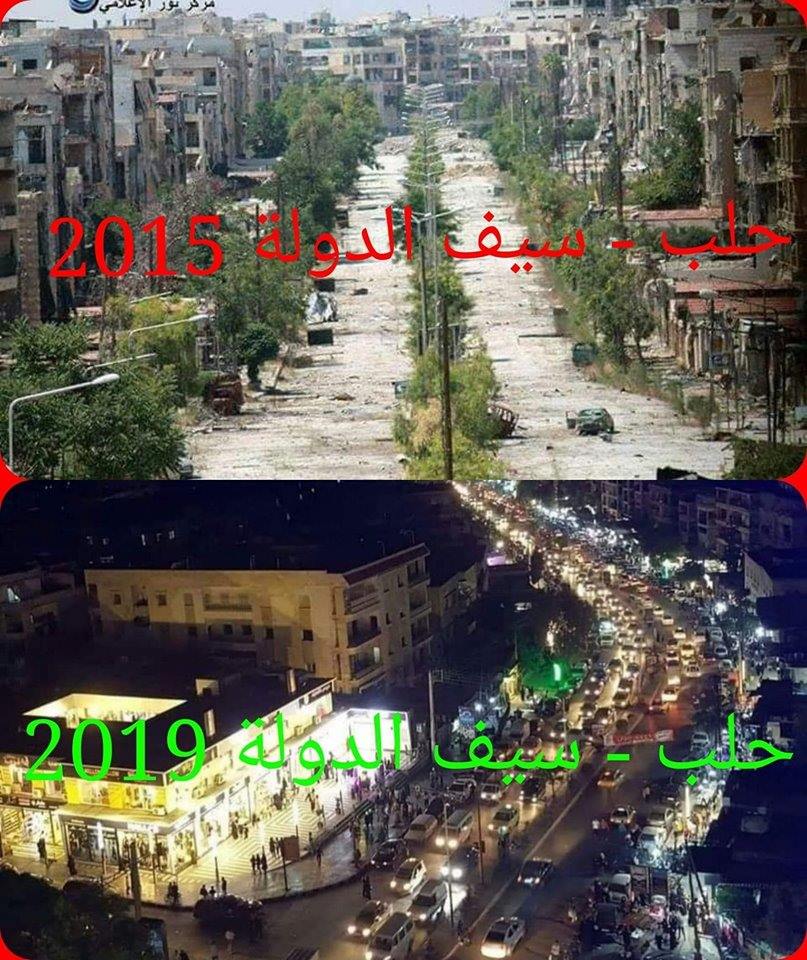 WHY Does A Politician Known For Leaking Information Still Have a Security Clearance & Still Run The House Intel Committee?