He actually received 81 million votes (supposedly) and his voters aren't embarrassed at all.

I love Trump--he was a GREAT President who did a bunch of good for the country...while your choice Biden, needs someone to wipe his ass as he destroys the country. You wanna talk funny SHIT?

Stryder50 said:
Forgetting to double check my math, plus some domestic(homefront~spouse) distraction.

Two items to remember;
1) The POTUS can recommend a Federal Budget, but Congress actually makes the budget and then the POTUS can either accept and sign-off, or decline and send back to Congress. Declining to accept and sign-off can result in a "government shutdown", which produces public negative feedback, and some economic repercussions. The last Budget Congress presented to Trump was way larger than he proposed/wanted, but under duress he signed-off on it.
...
Government shutdowns in the United States occur when there is a failure to enact funding legislation to finance the government for its next fiscal year or a temporary funding measure. Ever since a 1980 interpretation of the 1884 Antideficiency Act, a "lapse of appropriation" due to a political impasse on proposed appropriation bills requires that the US federal government curtail agency activities and services, close down non-essential operations, furlough non-essential workers, and only retain essential employees in departments covering the safety of human life or protection of property.[1] Voluntary services may only be accepted when required for the safety of life or property.[1] Shutdowns can also occur within and disrupt state, territorial, and local levels of government.

Since the enactment of the US government's current budget and appropriations process in 1976, there have been a total of 22 funding gaps in the federal budget, ten of which have led to federal employees being furloughed. Prior to 1980, funding gaps did not lead to government shutdowns, until Attorney General Benjamin Civiletti issued a legal opinion requiring the government to be shut down when a funding gap occurs.[2] This opinion was not consistently adhered to through the 1980s, but since 1990 all funding gaps lasting longer than a few hours have led to a shutdown.

Shutdowns cause the disruption of government services and programs, including the closure of national parks and institutions (in particular, due to shortages of federal employees). A major loss of government revenue comes from lost labor from furloughed employees who are still paid, as well as loss of fees that would have been paid during the shutdown. Shutdowns also cause a significant reduction in economic growth (depending on the length of the shutdown). During the 2013 shutdown, Standard & Poor's, the financial ratings agency, stated on October 16 that the shutdown had "to date taken $24 billion out of the economy", and "shaved at least 0.6 percent off annualized fourth-quarter 2013 GDP growth".[7]
...

Why the Government Shut Down and What Happens Next

A shutdown occurs when Congress can't agree on a budget. The longest U.S. shutdown began on Dec. 21, 2018. Learn details about previous times the government has shutdown.

This means that today's prices are 3.33 times higher than average prices since 1980, according to the Bureau of Labor Statistics consumer price index. A dollar today only buys 30.03% of what it could buy back then. 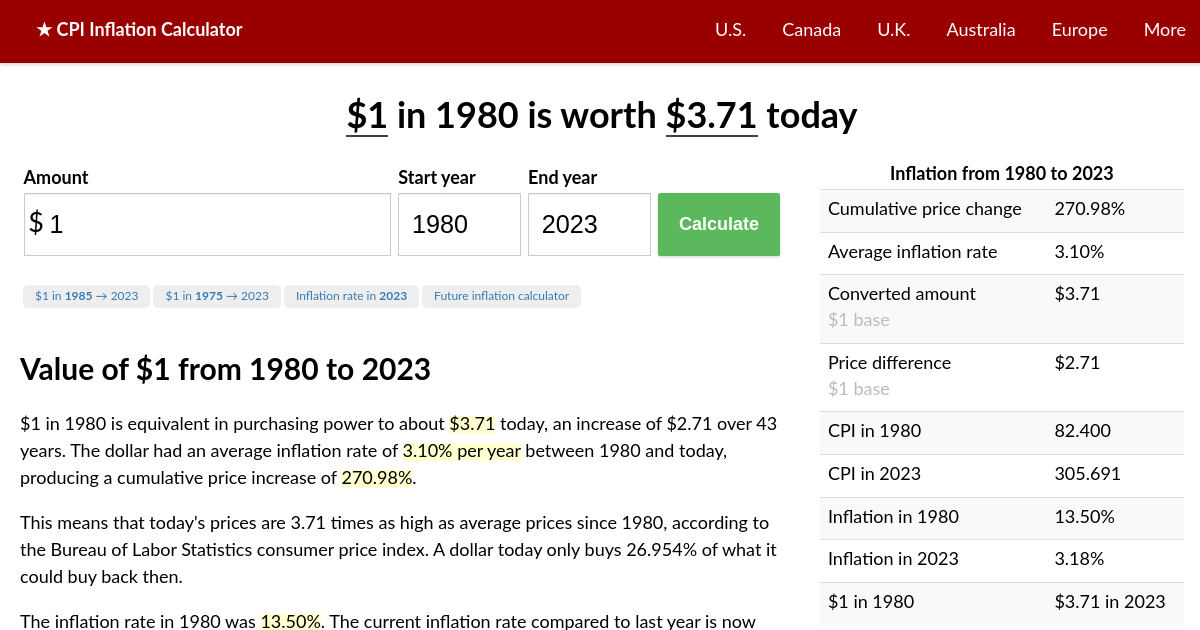 The 2.98% inflation rate means $1 in 1980 is equivalent to $3.33 today. This inflation calculator uses the official US consumer price index published by the Department of Labor.

He was followed by Bush who was on pace to more than double the national debt in 8 years before getting kicked out of office.

Then his son nearly doubled the debt in eight years.

Then Trump comes along and is on pace to about double the debt in 8 years before getting kicked out in 4.

Any chance that Biden´s administration will support it ? Led by France, 10 EU countries call on...

Two-Thirds of Only 7,500 Viewers of Biden’s Latest Press Conference Give It a ‘Thumbs Down’ – But Biden Won 81 Million Votes in the 2020 Election
2

We Are Supposed To Believe Joe Biden Got 12 MILLION More Votes Than Obama EVER Did?
4 5 6

Who wins the midterms? In truth, it depends on the rules of voting!

The democraps, their voters, demagoguery. Socrates was right.

What have Democrats done for America?
2

Gas prices are skyrocketing because of Biden
3 4 5