Hard Winter Ahead For Troops In Afghanistan  NBC 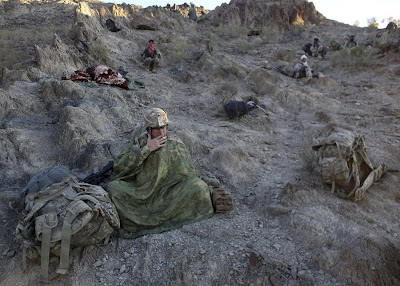 U.S. and Afghan soldiers rest during a operation on a cold morning near the town of Walli Was in Paktika province, Afghanistan on November 2, 2012. Goran Tomasevic / Reuters

As the rigors of an Afghan winter started to take effect, soldiers wrapped themselves in blankets to protect against the cold on a rocky outcrop in the east of the country on Friday morning.

Reuters photographer Goran Tomasevic, who won a Frontline Club award last week for the "unparalleled combat photography" he produced in a previous project, 18 days with the Syrian rebels, is currently documenting U.S. and Afghan troops in the country's Paktika province.

Read more . Hard winter ahead for troops in Afghanistan - PhotoBlog

God Bless our troops and please don't make it harder than necessary for them.
Stories about the fact and fiction of California history @ Saint Junipero Serra's Legacy
Life in the military and other items @ A Soldier's Stories
I voted for President Trump and am proud of it!

Location
Out here in the middle.

I ope it's a miserable winter.

It will punish the insurgency and slow them down. Just like in 04/05.
"Battle not with monsters, lest ye become a monster, and if you gaze into the abyss, the abyss gazes also into you."
- Friedrich Nietzsche

Afghanistan opium harvest drops by a third - UN
20 November 2012 - The opium crop has fallen this year, but more Afghan farmers are trying to grow it

Opium production in Afghanistan has fallen by a third, according to a United Nations report. The fall came even as the amount of land used to cultivate the crop rose by 18%, the UN Office on Drugs and Crime (UNODC) said. More farmers have been trying to grow the crop as the price of opium has been rising. The fall in the harvest is being attributed to bad weather and disease. The rise in the area devoted to growing opium poppies came despite the intensification of government eradication efforts, with almost 10,000 hectares of the crop eradicated in 2012, UNODC reported.

Cultivation was concentrated in the south and west of the country in areas where "insecurity and organised crime are present", UNODC said. The number of provinces with "poppy-free" status remain unchanged at 17, according to the report. The UN says the correlation between insecurity and opium cultivation has been apparent for several years. "Improved living conditions, including greater security and rule of law, should be encouraged in Helmand and nationwide if we are to help poor farming communities to support themselves," said UNODC's director Yury Fedotov.

Helmand was the province with the largest amount of land being used for opium production, the report said. Last year, opium production in the country was reported to have doubled on the back of rising prices for the crop. Government eradication programmes are deeply unpopular in the south and west of the country, the BBC's Quentin Somerville in Kabul reports. The Taliban and criminal networks both in Afghanistan and Pakistan profit greatly from the drug, our correspondent adds. Afghanistan produces more than 90% of the world's opium.

The streets of kabul

In Afghanistans Valley of Death, A Medevac Teams Miracle Rescue

US Broadens Fight Against ISIS With Attacks in Afghanistan

DJ Trump Was Right About The Media

Biden’s Poll Numbers Crash In Iowa, With 62% Disapproving Of His Job Performance

Be prepared to defend yourselves against a great evil
2 3

So, Never-Trumps, are you happy now with Biden?
2