Erick Erickson - The Face of Self-Delusion 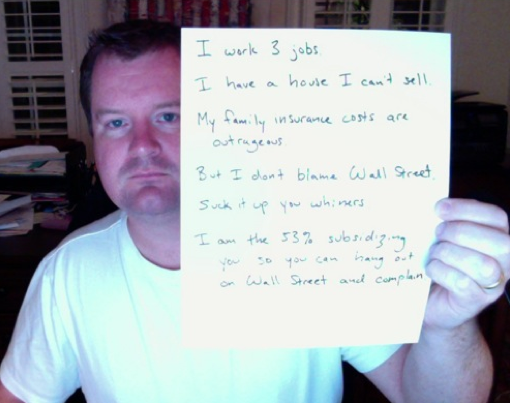 Andrew Sullivan said:
I admire the attitude and share it. But empirically, he's out of his mind. This global depression was triggered by fancy-ass financial products that were unintelligible even to those who sold them. The huge amount of public money spent to bail the bankers out came from the 53 percenters. Wall Street has nonetheless slowed down Dodd-Frank to a crawl and are festooning themselves with millions of dollars in bonuses, while poverty soars. It does matter what Wall Street does. It has transformed our world, including that of conservatives. Maybe we should do nothing about it. But that it doesn't matter? Please.
Click to expand...

Erick then goes on to lambast the debunked demands others on this site have tried to prop up as a strawman.

As someone who sympathized with the Tea Partiers (initially, before the Boomers hijacked the movement), I see an irony in the feeble attempt of right-wingers to deny the truth:

Wall Street hijacked this country, and we are all worse off for it. Especially those who pay Federal income taxes.
You must log in or register to reply here.

New York Millionaires Head To Florida Soon.What Will Protestors Do All Winter ??

689 Reasons to vote against Obama

Republicans Have No Plan to Fix Inflation
37 38 39

M
Goya Foods CEO: We are under attack by our own government