Enter Your Opinion On How ISIS Will Be Stopped

We all know ISIS grows in member numbers and in geography. It is the overwhelming consensus opinion bombing by the several countries now bombing them will not stop them. So state what will stop them in your opinion and try to leave politics out of this thread.

I declare a state of emergency and elect to send some of most notable women lib lesbians to teach those mad men a lesson...

So are the homersexuals, they should seek therapy together...

fmdog44 said:
We all know ISIS grows in member numbers and in geography. It is the overwhelming consensus opinion bombing by the several countries now bombing them will not stop them. So state what will stop them in your opinion and try to leave politics out of this thread.
Click to expand...

So is global warming.
P

They won't. That's my honest personal opinion as a private citizen. The bombing campaign will slow them down, but it won't stop them. They're going to finish conquering Iraq and Syria. Their territory will become essentially the Islamic version of the Papal States. The caliph will be assassinated, most likely by members of another faction. It will break down into civil war as leaders compete for his title. The Kurds and Shi'a are fucked and the most brutal will win. That's the best case scenario I can imagine if current factors hold (meaning we don't put boots on the ground, or one or a few of the Arab countries don't do it for us).


Hossfly said:
Ground combat is the only solution.Everybody knows that.
Click to expand...

Where we fucked up was caving to the dumbass Coast libs' demands and leaving. Iraq wasn't ready to go it alone yet. Their government was still weak. Their infant military still lacked discipline and the cultural shift required to be effective. The wider culture was still dominated by tribal and sectarian thinking. There was no real sense of nationalism. There was no concept of Iraq anyone was willing to die for. The rehabilitation of Iraq was going to be a long term project, just like that of Afghanistan should have been.
Last edited: Feb 19, 2015
P

and yeah , pretty much how I see things Pedro although I have no thoughts on an assassination . Course , the leader in those areas of the world better always be careful . Latest I Heard is that Italy , land of the Cross is under threat if they send troops to Libya . The threat is that if Italy sends troop then 'isis' will cause a mass immigration to Italy . Makes sense to me as Italy is already seeded with Tunisians and Libyans that already [for the last few years] have made their way on anything that floats to Lampadusa . Then their goal is Sicily and then Italy . Once they make Italy the whole of Europe is open to them . Some of what I just said I heard on the news and some is my theory .

a little info on what I said about Lampedusa . --- Libyans Continue Flooding Lampedusa ---

While calling itself Islamic, the vast majority of the ISIL cadre are a bunch of barbaric thugs out to enrich themselves. They rely on a bunch of brainwashed idiots to carry out their plans while they hide behind the lines.

The way to stop ISIL is to take out and remove that cadre. Without leadership, the remaining scumbags will disperse, blow themselves up, or walk into enemy fire.

If the cadre is to be wiped out, it will only be by Muslim governments in the area that step up to fight them.

Turkey is a big piece of the equation.

The Turks want Assad out and ISIS continues to be a significant problem for the Syrian government.

ISIS has also been fighting against the Kurds who are seen as an enemy of the Turks,

Despite their latest agreement with the US to help in the war against ISIS it's yet to be seen whether Turkey will play a significant role in the fight or only offer token support.

I get the feeling that Turkey would like to rebuild the borders of the 1912 Ottoman Empire and that ISIS may prove to be a useful silent partner in doing so.

hey Decus , little I know about the 'ottoman empire' I think that its the 'calphate' that came to an end in the , think its the early 20s [about] . If so or if I'm at least on track the 1912 borders are the old caliphate borders aren't they ?? If so , then yeah , erdogen also wants the caliphate back . I think its only normal that he and many , most muslims / arabs want it back . 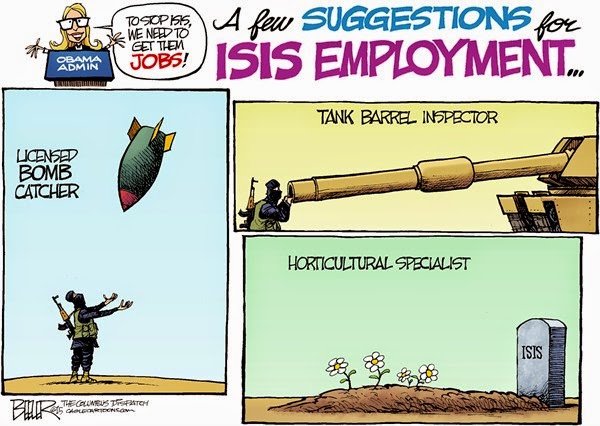 People are starting to fight back already as are other countries..........

ISIS is trying to piss off the world and they are doing a good job of it.

KARMA is a bitch.

ISIS has been called a cult but it is not only a cult, if one wants to call it as such, but it is also a religious cult. That means they not only have to maintain the impression that their leader is great but also a man of god. If one stands there burning pictures of their 'man of god', or similar activity, the leader can not exactly claim god any special affinity for him. One does not have to attack Islam to attack ISIS.

The Turks rolled tanks and troops into Syria to recover the tomb of the grandfather of the founder of the Ottoman Empire. Hard to believe that the Turks watched (bird's eye view in fact) while Kobani bled and men, women and children died, but because a symbol of the Ottoman Empire was thought to be at risk an effort was made to save the tomb. Go figure:

I think history proves that, by and large, Turkey gives a shit about Turks and Turkey and everyone else can, in their opinion, fuck off to hell.
You must log in or register to reply here.

Do you think you know all about Combat Vets and PTSD?

Instead of these boycotts and cries of RACISM, US Corporations and concerned citizens should make sure everyone has an ID
2