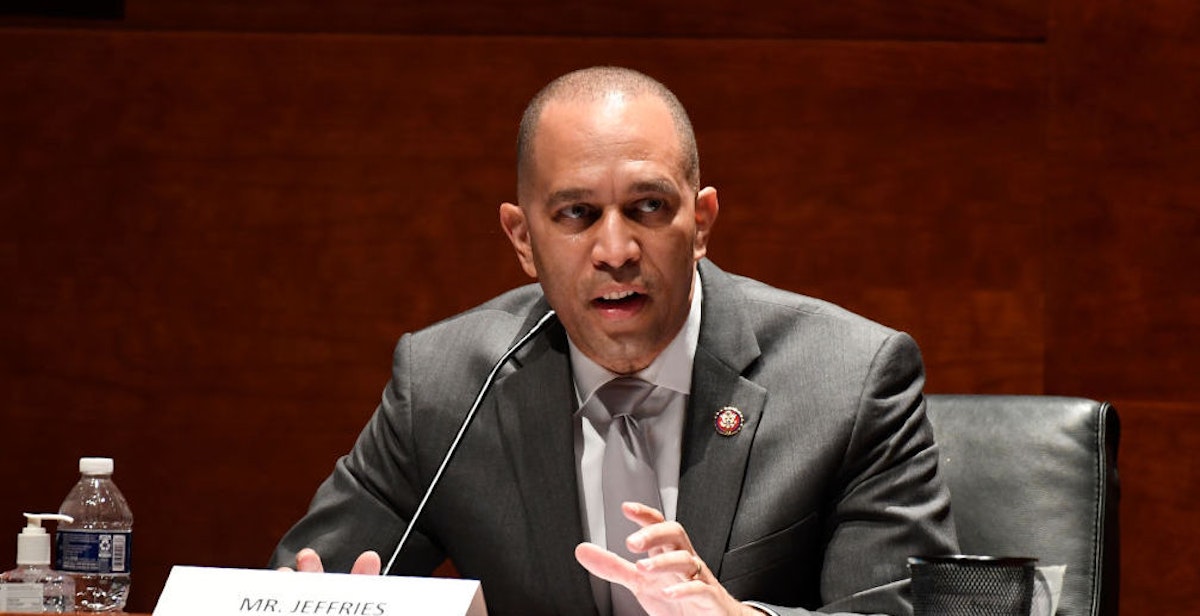 www.dailywire.com
5 Aug 2021 ~~ By Emily Zanotti
Chairman of the House Democratic Caucus had harsh words for the far left and, particularly, far-left House Democrats on Wednesday, insisting that election results in New York and Ohio — where “moderate,” more Establishment Democrats routed progressive challengers — prove that Democrat voters are rejecting a far-left message.
“Representative Hakeem Jeffries of New York, a top member of House leadership, said in an interview Wednesday that Democratic voters were clearly rejecting candidates from the party’s most strident and ideological flank,” The New York Times reported Wednesday as part of its Ohio coverage. “Where some primary voters welcomed an angrier message during the Trump years, Mr. Jeffries said, there is less appetite now for revolutionary rhetoric casting the Democratic Party as a broken institution.”
As the Daily Wire reported, the “Establishment”-supported Shontel Brown soundly defeated Bernie Sanders’s former campaign co-chair Nina Turner in a Democratic primary in Ohio on Tuesday night. Turner, an avowed progressive, had hoped to become part of the far-left “Squad” was left puzzled when Brown easily defeated her.
She also immediately leveled an apparent anti-Semitic attack at her opponent, Brown, claiming that Brown took “evil money” to fund her campaign. Turner was, ostensibly, referring to a generous donation Brown received from the Democratic Majority for Israel.
~Snip~
Progressives do not appear to be taking Jeffries’ advice to heart. On Twitter and in interviews, members of the Squad insisted that either Ohio was simply not ready for a more progressive Representative — a possibility given that the swing state tends to favor middle-of-the-road candidates. Voters in OH-11 went heavily for President Joe Biden and Democratic Congresswoman Marcia Fudge, who held the seat until she was tapped to serve in the Biden administration, was, generally speaking, a more moderate Democrat.
Rep. Cori Bush (D-MO) said that the Ohio primary had no wider message and that the results meant “absolutely nothing.”
The Ohio election had indications for Republicans running in 2022 as well. A candidate, endorsed by former President Donald Trump was able to secure a win.

Comment:
Yet Hakeem Jeffries votes for every Progressive Marxist Socialist/DSA Democrat Commie slop that Pelosi puts in front of him. He is a liar and a cheat, same as all Leftist politicians are. They are stewards of the destruction of this country. As long as they get theirs, they could care less how many lives and families they destroy.
Hah! Nobody EVER called the radical Democrats "moderates", until the squad came along, then all the Democrats suddenly seem moderate relative to THEM. They should thank the squad for making them look "so good".
Unfortunately regular 'moderate" Democrats will do as their told by their masters. They needed the far left to get Biden in the White House. There's no putting that toothpaste back in the tube.
Establishment Democrats co-opted the PMS/DSA Commie Left and used them as thugs to get what they wanted, power through Intimidation and violence. It worked. but...now the dog is starting to turn on it's master. the master will either have to train the beast they created or be killed by it.
Wise traditionalist Democrats need to either start their own party or switch to Republican where they actually share more common ground than the radical far left that has taken over their party.
In the same vein, those obvious Leftists writing on this forum should take heed.
The coming 2021 and mid term elections should prove to be very interesting....
Where is, repeat, where is Joey Xi Bai Dung? "The World Wonders".​

The Democrat Cultists cause 99% of their own problems and then blame mainstream society
There are fascist socialist and there are marxist socialist.
They are both totalitarian/authoritarian police state types of governments.
The Democrat Cult is creating a police state.
They have politicized the DOD and the DOJ
You must log in or register to reply here.

Why won’t Democrats tell us how illegals help the black and poor populations?

Can the CDC suspend my mortgage?

A Major Fear for Democrats: Will the Party Come Together by November?

Democrats Whip Two Black Representatives For Wandering Off The Plantation

Check out this kid’s drawing of Kamala Harris