What could possibly go wrong....these JUDGES NEED to feel his knife! 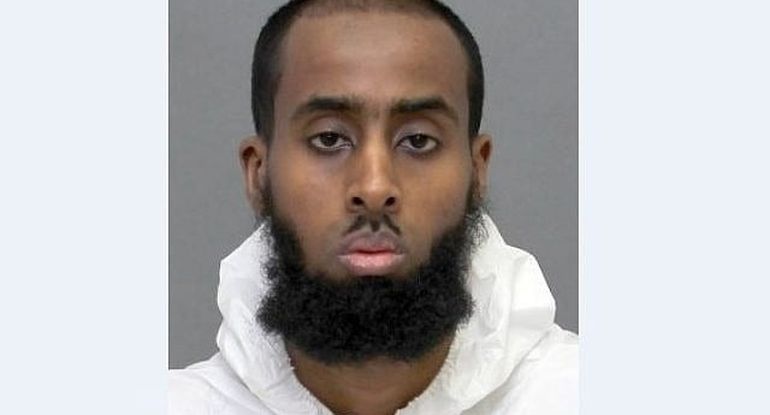 Good news: the top court in Canada’s most populous province, the Ontario Review Board, struck a strong blow against “Islamophobia” Wednesday when it declared, according to the Toronto Sun, that a young Muslim named Ayanle Hassan Ali was “now eligible for extensive forays into the community, despite remaining a ‘significant threat’ to the public.”

What could possibly go wrong? Only venomous “Islamophobes” could possibly object, right? After all, all Ayanle Hassan Ali did was stab three Canadian soldiers and explain that Allah told him to do it. How could anyone deny this fine young man the right to roam freely around Toronto, Hamilton, and other Ontario cities?

Only those “Islamophobes,” apparently. In mid-July, the Toronto Sun reported that efforts to have Ali attend Mohawk College in Hamilton, Ontario, “have now been scuttled,” according to Ali’s psychiatrist, Dr. Gary Chaimowitz, “because the ‘unflattering’ media coverage led them to worry that Ali himself might be in danger from another student.”

Here is a man who stabbed three Canadian soldiers under what he said were orders from Allah. At the time of his attack, Ali himself said: “Allah told me to do this, Allah told me to come here and kill people.” But the Canadian press reported that Ali was found “not criminally responsible” for his knife attack. It is apparently inconceivable to Canadian authorities that a believing Muslim could read the Qur’an’s repeated exhortations to “kill them wherever you find them” (2:191, 4:89, cf. 9:5) and “strike the necks” of non-Muslims (8:12, 47:4) and get the idea that Allah was telling him to kill people. Why, Ali must be schizophrenic!

Ali might indeed be crazy, but there is no doubt that he is dangerous. Chaimowitz admitted that Ali’s “psychotic disorder is not completely treated. I still have work in the future.” And Crown attorney Craig Fraser said: “He still feels it is his obligation to do something about it.” That “it” is the supposed oppression of Muslims by the Canadian government.

Yet despite all that, Chaimowitz actually had the blistering audacity to claim that Ali won’t be attending Mohawk College — not because of the danger he poses to students and staff, but because they pose a danger to him. You know how MAGA-hat wearing anti-Muslim bigots have free rein at Canadian colleges, terrifying innocent, doe-eyed hijab wearers? Apparently Chaimowitz, imbibing deeply of this fantasy, thinks Ali, poor lamb, will be threatened by just such people if he attends college.

Of course, his safety is paramount. To be concerned about the safety of the Mohawk College students or others who might encounter this jihadi would be “Islamophobic.” Despite pro forma protestations to the contrary, no one seems to be concerned about the danger Ali himself might pose. Where have the victims of Ayanle Hassan Ali’s jihad attack been shown any solicitude similar to that which is being shown for Ali himself?

Nonetheless, Chaimowitz, said the Sun, “recommended the board clear him to have unaccompanied passes into southern Ontario and travel within a 50-kilometre radius of Hamilton for education or employment. They also agreed with a request by his lawyer Maureen Addie that he be eligible for 48-hour overnight passes to Toronto under the supervision of his father or sister.”

And now it is done: the Sun reported that “Now he’s being allowed to find another educational institution in the Hamilton area.”

Chaimowitz piled audacity upon audacity, declaring: “We take risk to the community as our priority.”

But obviously he doesn’t, and the Ontario Review Board doesn’t. And given the fact that Ayanle Hassan Ali’s views have not changed, why is allowing him to roam free even being contemplated?

One thing is certain: if Ayanle Hassan Ali is ultimately released and tries to kill people for Allah again, all those responsible for the utterly insane decision to let him roam about freely should themselves be arrested and held accountable for endangering the Canadian public.
You must log in or register to reply here.

Let's face it. The reason many whites don't like blacks is that blacks commit so much more crime than any other race

B
Both sad and ridiculous