Yes tax away. Don't you know we need this national public safety network, it will work seemlessly, well of course everyone has to be on the same page and we all know that will happen, all responders will be accurately trained on how to use it and operate it. Stop everything to update and send the information so that even the CIA will know when a drug bust is going down. Phones and E-mail are so outdated we need another system to learn to use so that everything will work better. And by the time everyone is trained properly on it and it is implemented we will need another national safety network because this one will be outdated and obsolete so they might as well tax us more for possible future upgrades. Because don't you know this is all about public safety.

Do You Want to Pay a 'National Broadband Fee'? | News & Opinion | PCMag.com

all articles are on the same topic so you can look at different sources.
W

The expansion is funded partly by fees paid by telecommunications companies. Many of those companies contended the FCC did not have the authority to use the money for Internet service.

In a 297-page ruling, a three-judge panel of the 10th Circuit Court of Appeals in Denver dismissed the challenges as either unpersuasive or not issues the court could address.

The FCC in 2011 estimated the expansion would provide high-speed Internet service to about 7 million people.

The new labels, designed much like nutrition labels, include prices, hidden fees, overage fees, data allowances, broadband speed and other relevant information. "These labels provide consumers clarity about the broadband service they are purchasing, not only helping them to make more informed choices but also preventing surprises when the first bill arrives," said FCC Chairman Tom Wheeler. "Customers deserve to know the price they will actually pay for a service and to be fully aware of other components such as data limits and performance factors before they sign up for service." 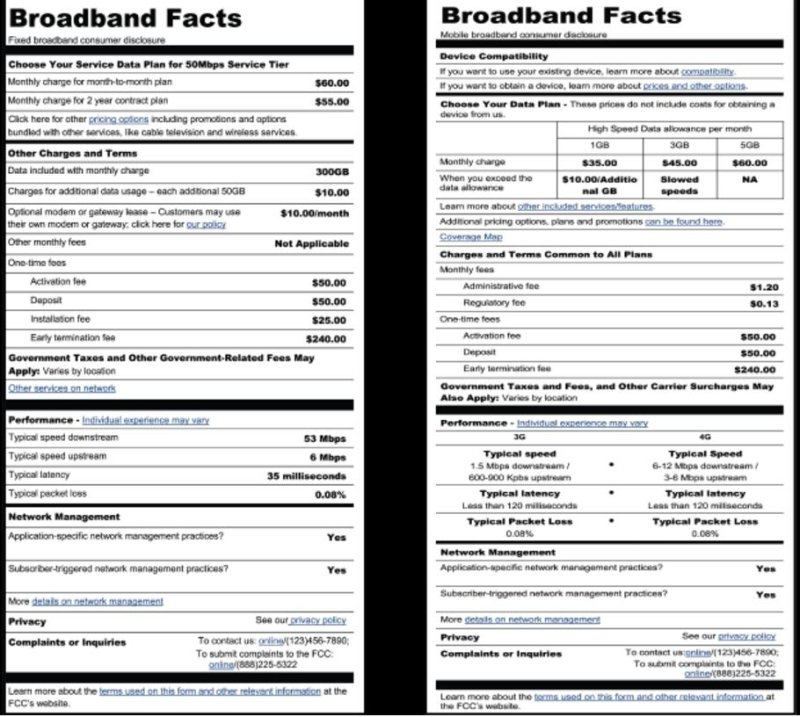 Internet service providers are not currently required to provide labels, they are only recommended. As part of the FCC's existing Open Internet transparency rules, ISPs already provide the information on that will appear on the labels, however, the labels make the information clear and simple to find and understand. The FCC said it receives more than 2,000 complaints a year over "surprise fees associated with consumers' internet service bills."

A spokesperson from the National Cable & Telecommunications Assn. told Forbes in an email, "We appreciate this contribution by the Commission to offer consumers that same information in a format they are familiar with." Last week, the FCC announced it would provide low-income households internet for $9.25 a month.

Granny gets impatient when it takes a full second to load a webpage...

America has slower LTE wireless than Canada or Mexico
June 8, 2017 - A new report on wireless broadband is out, and it may not leave readers cheering “USA! USA!” According to OpenSignal’s study, Mexico, Canada, France, the United Kingdom and more than 50 other countries offer faster LTE cellular data speeds than the U.S.

Still, the latest installment of this biannual survey by the London-based research firm isn’t all bad. OpenSignal’s findings, based on almost 20 million reports collected by its app from 558,260 users in the first quarter of the year, also show that the U.S. is making strong progress in expanding LTE availability to more users, even if it’s not always the fastest.

A need for speed in any language

According to OpenSignal’s data the average LTE download speed in the U.S. was 14.99 megabits per second (Mbps) in the first quarter of 2017. That’s not exactly bad — it’s an improvement from the 13.95 Mbps average it the survey reported six months earlier. But a wide variety of other countries offered much faster speeds. A speedier wireless connection means you can download apps faster and share photos quicker, as well as stream Ultra High Definition video and transfer the sort of files that would ordinarily require a wired connection.

Prime Minister Justin Trudeau meets with Mexican President Enrique Pena Nieto during November’s APEC Summit in Peru​
Singapore led OpenSignal’s list with an average of 45.62 Mbps, followed by South Korea with 43.46 Mbps and Hungary with 42.61 Mbps. The next dozen countries all saw average download speeds above 30 Mbps. You can fairly object that most are in one part of Europe or another and therefore don’t require local wireless carriers to cover large expanses like the American West, but Australia still manages 33.76 Mbps while Canada tops out at 30.58 Mbps.

Another bandwidth-analysis service, Ookla’s Speedtest.net, posted somewhat consistent numbers in its last round of country-specific figures. It found that LTE-capable phones that could connect to a network in the U.S. averaged 19.61 Mbps over the first six months of 2016. In Canada, LTE phones yielded 25.21 Mbps downloads on average, while in Mexico they managed speeds of 16.19 Mbps.

The other part of the equation: availability
Click to expand...

A young lady with a future

Youre Born a Copy but Die an Original

Are You Ready? 3G to be Retired

Some ideas for a new crypto coin

Why is ISIS fighting against Taliban terror?
2 3

‘I Don’t Even Remember What I Read’: People Enter a ‘Dissociative State’ When Using Social Media.